• Many people have just one glass of unclear water a day 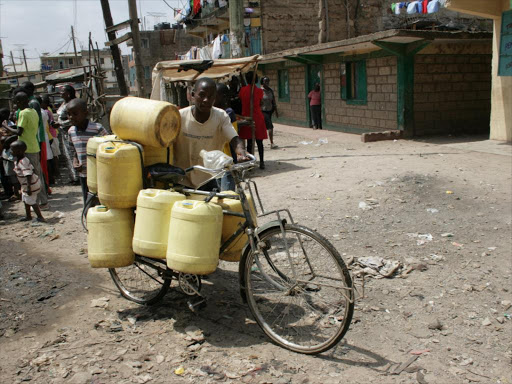 SHORTAGE A man pushes water on the bicycle
Image: FILE

Eastlands is so perennially and dangerously short of water and the only happy people are vendors and cartels.

Residents don't believe the city will end the shortage; the city blames cartels.

In a report titled 'Maji ni Uhai Maji ni Haki' released by the Mathare Social Justice Centre, residents say the problem is so severe that mothers must choose between washing dishes and bathing their babies with the little water they have.

"Lack of access to water causes many forms of insecurity as health suffers, as many only have access to one glass of water a day, which is not only unclean but also unreliable," the report says.

About 70 of Nairobi’s population lives in informal settlements, only 20 per cent of them have piped water. They are forced to rely on private suppliers, many involved in powerful water cartels, the report said.

Most people in Mathare, it said, access water through illegal communal pipes or purchase it from vendors and kiosks.

Selling water is a thriving informal business in Mathare with minimal or no rules.

The report says a survey by the Mathare Social Justice Centre shows more than 50 per cent of surveyed people has suffered from waterborne illness.

In a day, one Mathare clinic sees 15 cholera patients about 200 infected by typhoid.

The MSJC says of the people they interviewed in prosperous neighbourhoods, none had ever contracted an illness from drinking or using water.

Speaking to the Star on Friday, Water CEC Larry Wambua blamed the problem on the cartels that have diverted water in Eastlands estates. He reassured the county is committed to ending the problem.

"The cartels are so daring that when we go to disconnect the illegal water points, they come out armed to fight back. We are always with police but since we can't shoot back at civilians we are sometimes forced to retreat," the CEC said.

Nairobi Water MD Nahashon Muguna promised to respond after going through the report.

Governor Mike Sonko in January said he would reshuffleNawasco to improve services. He said residents are spending too much on water because of cartels that have been diverting it.

Post a comment
WATCH: The latest videos from the Star
by MAGDALINE SAYA REPORTER
News
23 March 2019 - 00:00
Read The E-Paper