Great driver of the Big Four founders, laptops scaled back to tablets and now labs

• Lack of money, lack of electricity, lack of teacher training, lack of storage 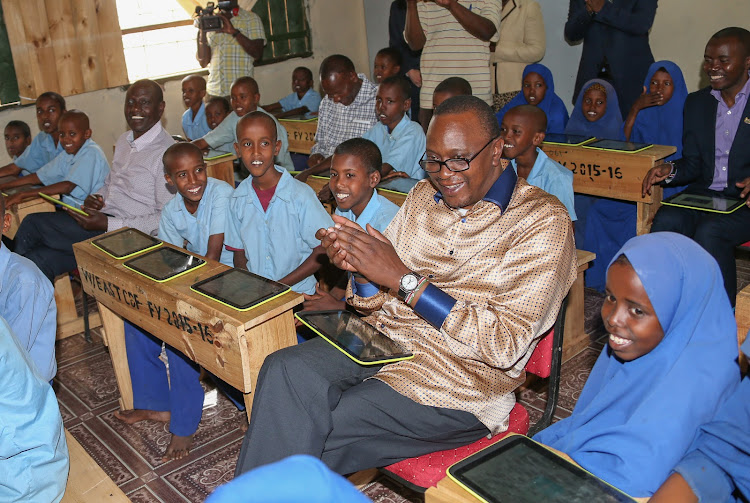 President Uhuru Kenyatta and Deputy President William Ruto in a classroom with pupils of Catholic Primary School in Wajir where they had visited to inspect the implementation of the Digital Literacy Programme(DLP).
Image: FILE

The much-touted Jubilee laptop project collapsed because teachers lacked the required ICT skills to use them and most schools lack electricity to power them.

Then there's all the dust in mud-floored, open-walled classrooms where goats occasionally wander.

Primary school headteachers yesterday delivered a damning revelation of how poor teacher training and regular disconnection by power due to late bills made the devices useless. The bright green tablets might as well bear a white elephant logo.

The Sh24.6 billion laptop project was touted as the answer to  the missing piece of digital skills in Kenyan schools,

Bu that turned out to be too expensive, there were procurement issues and it was scaled back to tablets for all primary pupils — and two laptops for teachers per school. Now we're talking about digital labs.

During its inception in 2016, the government boasted of supplying 95 per cent of learners in Class 1 with tablets.

Weighing in on the failed project for the first time, headteachers reveal how the tablets remained locked in storage rooms and unused. Sometimes there were no storage rooms or lockers. Sometimes devices were stolen.

The laptops were supplied once and are now being shared by three classes.

"The gadgets are there but they have not been used effectively, because there is lack of expertise on how to use them," Kenya Primary Schools Head Association chairman Nicholas Gathemia said.

The training took a scant two days. Teachers dismissed the time as too little to effectively train teachers.

Gathemia also said a plan to continuously supply the gadgets never saw the light of day, as the government only supplied the laptops/tablets once.

This means those who received laptops in Class 1 proceeded with them to Class 2,  leaving newly admitted pupils with no devices at all.

The medium-term budget expenditure document by the Education ministry reveals that the Treasury slashed Sh5 billion meant for the project.

"If the gadgets are to be used right now, then the pupils in three classes will share devices meant for one class," he said.

Despite government efforts to ensure each school is connected with electricity, the headteachers said most of the schools remain in darkness.

Thus tablets that require power (all of them) are often unused as schools can't pay electricity bills due to low government funding.

The government provides Sh3 to every child enrolled in school to cater for electricity each year.

"You can imagine a situation where a school has about an enrollment of 3,000 students, then the head teacher has only Sh9,000 for electricity each year. The average amount of the bill each month is Sh24,000 —  this definitely means the school cannot sustain the bills," Gathemia said.

The head teachers are now suggesting the government waive the electricity cost.

The ministry in February announced that it will now focus on the development of computer labs, terming as "Phase 2" of the digital literacy programme.

Post a comment
WATCH: The latest videos from the Star
by LEWIS NYAUNDI Education Reporter
News
22 March 2019 - 00:00
Read The E-Paper