SIX FED HIM TO CROCODILES

• Only one ranger accused of shooting man dead. Others likely to be charged as accessories

• Trespasser her drove his livestock to graze in the park 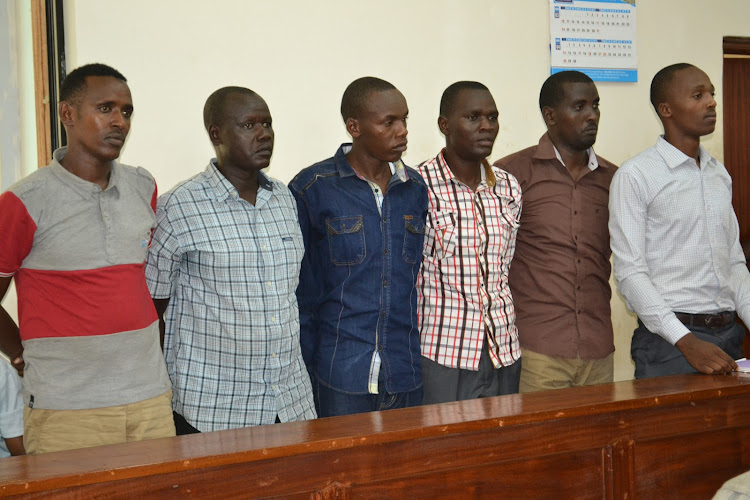 Six KWS rangers accused of shooting dead a herder in Tsavo East National Park and feeding him to crocodiles have been arraigned in court.

They were not all charged, however, after the prosecution recommended that only one man be charged with murder. It said the rest should be charged as accessories for helping dispose of the body in the crocodile-infested Galana River.

They are accused of killing Lami Bocha on December 24, 2018, at the Huri area of the park where the victim drove his livestock to graze.

DPP counsel Alice Mathangani said the five should be transferred to the Garsen law courts to face charges of accessory to a crime.

Mathangani said they recommend murder charges against Njoroge at the High Court in Malindi.

The victim's family is represented by lawyer Judy Thuku.

The suspects, who are represented by three lawyers, objected saying the lower court had no jurisdiction to transfer a case. Defence lawyer James Mouko said only the High Court could give direction.

“We are aware ...   the intention of the police is to take the suspects to Garsen, one is to be charged with murder,"  he said.

He said matters of law arose since police want to treat the suspects separately. Mouko opposed transfer to Garsen because it's where the deceased lived and it could be dangerous for them.

Other defence lawyers argued the political atmosphere in Garsen was unsafe.

The mention was set for April 2. All the suspects are to be remanded at the Malindi police station.