•President makes appointment despite board hiring a recruitment consultant 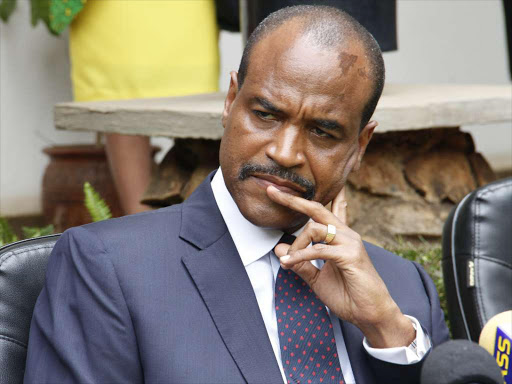 President Uhuru Kenyatta on Tuesday picked Brigadier John Migui Waweru to be the director general of Kenya Wildlife Service, a move that has jolted conservationists.

The appointment comes months after the board at the agency through a consultant kicked off the process of recruiting the DG.

Last year, the agency through an advert called for applications for potential candidates for the post. The dateline was February 25, after the position was re-advertised in January.

“The appointment shocked the board too. Shortlisting had already been done and interviews started. In fact, even on the day of the appointment the panel was still grilling some candidates,” a source familiar with recruitment process told the Star.

When reached for comment, KWS chair John Waithaka didn't pick our calls nor respond to inquiries on whether they were in the loop on the President's decision.

“Just like the other agencies, the work of recruiting the DG is a preserve of the board, which does the interviews and forwards the name to the line Cabinet Secretary to gazette, which didn't happen in this instance,” Itela said.

Uhuru Must Step Up To Tackle Rhino Poaching

We were getting together for a Lewa Wildlife Conservancy board meeting and as a newcomer I was excited to be part of this world-class operation. ...
Opinion
8 years ago

“The appointment is illegal and must be challenged,” another conservationist who wished not to be named said.

Itela termed the appointment a blunder.

“They are committing the same mistake they did with Kiprono and Kitili. They had no conservation management skills,” he said.

“The excuse might be that KWS is a security agency, which is not accurate. Security is only a small function in conservation. KWS' core function is conservation management, which needs a professional in that line too,” he said.

Even though KWS has a uniformed and disciplined wing, it didn't need a brigadier at its helm but an individual with strong conservation skills, Itela said.

Waweru will replace Kitili Mbathi who resigned in July 2017 after serving for less than two years. Kitili left in a huff after falling out with then chair of the board Richard Leakey.