Detectives have shifted their focus from Treasury in the Sh21 billion dam probe to two implementing ministries in what has now sucked in two principal secretaries.

The Star has established that the Sh7.8 billion advanced payment to Italian firm CMC di Ravenna for the construction of Arror and Kimwarer dams was triggered by Kerio Valley Development Authority chiefs and two former PS.

The details emerged after DCI boss George Kinoti summoned three more CSs: Mwangi Kiunjuri who was the minister when the two deals were signed, his successor Eugene Wamalwa and Water CS Simon Chelugui.

Letters in our possession indicate that Nyakera and Koech wrote to Treasury PS Kamau Thugge on different dates seeking the release of an advance payment to CMC di Ravenna following requests from KVDA.

Koech wrote a letter to Thugge on October 5, 2018, asking the Treasury PS to release Sh3.5 billion as advance payment to the contractor in respect of Kimwarer dam.

The Director of Public Prosecutions Noordin Haji has given the clearest signal yet that heads will roll in the Sh21 billion dam scandals even as it ...
News
1 year ago

Koech who has since been moved to the Ministry of Wildlife said in her letter that “the contractor is entitled to 15 per cent advance payment as stipulated in clause 14.2 of the contract.”

Some of the instruments of payments that were forwarded to the Treasury PS to facilitate the release of the down payment included a payment voucher, the bank guarantee of an equivalent amount, the interim payment certificate, proforma invoice and contract agreement.

On his part, Nyakera who has since been hounded out of office, wrote to Thugge on December 21, 2017 asking him to release Sh4.6 billion for the construction of the Kimwarer dam.

"This is therefore to request your office to execute the payments,” Nyakera wrote.

He went on: “Please note that according to the contract design, completion of works and remedying of any defects will be done at a price of USD 277,407, 605.50 (Sh28bn) excluding taxes.”

Nyakera has however distanced himself from the matter saying that he was already out of office when the payments were executed.

"I cannot ask for payment when there is no budget. Period. For the period I was PS Planning (2017/2018), our total department budget including and all our over 10 SAGAs was a paltry 5bn (once you remove CDF of 31bn), Nyakera said.

He added; "I was not a PS on 21 December 2018 when the Star claims I signed such documents and that the payments for Arror/ Kimwarer were done in 2018/19 financial year, a period when I was not a PS!" 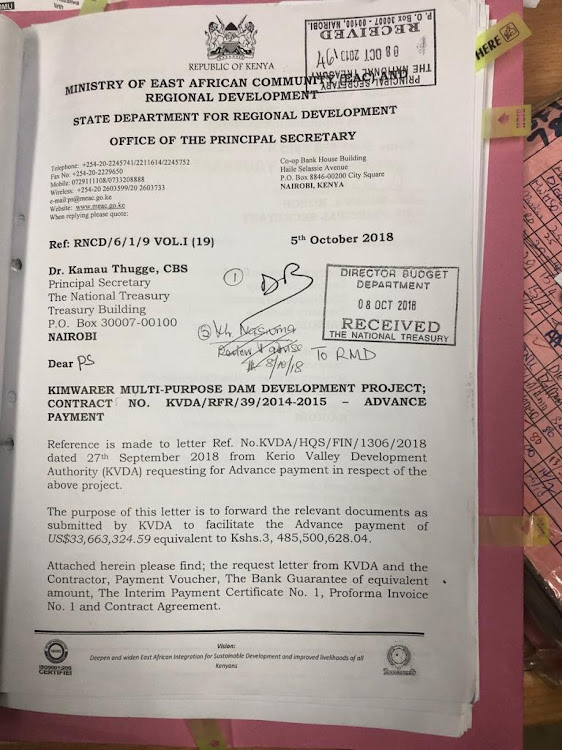 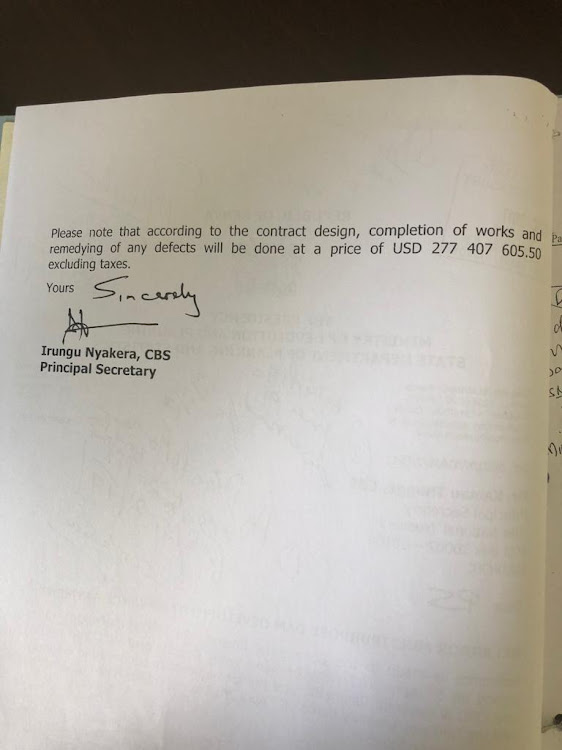 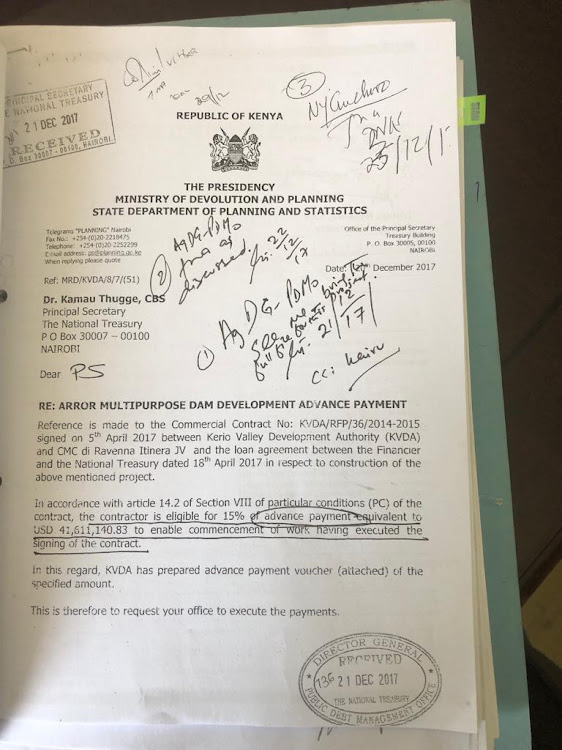 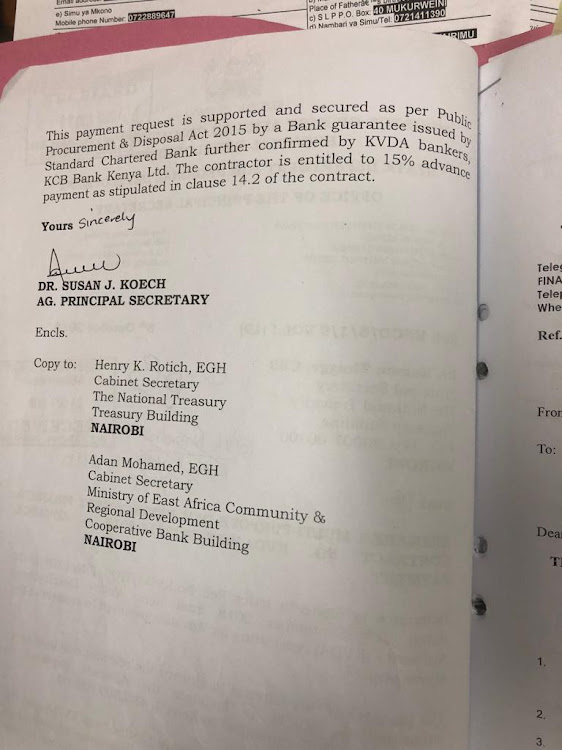 It’s understood that Treasury CS Henry Rotich who has been grilled by DCI detectives has insisted that his role was limited to signing the finance agreement with the Italian government.

Sources at DCI said the minister has insisted that he cannot answer for the procurement agency which is KVDA and the implementing ministries.

The Directorate of Criminal Investigations is investigating a total of Sh21 billion advance payments to CMC Ravenna for the construction of the two dams amid questions why money was wired without project designs.

The DCI and the Director of Public Prosecutions Noordin Haji have indicated that investigations into the dams scam are a complex probe that would require international assistance.

Documents in possession of the Star also reveal that the Italian contractor had by May last year requested Treasury for a Sh19 billion import duty exemption for the importation of heavy machinery and equipment for the construction of the Arror dam in Elgeyo Marakwet.

In respect to the Arror dam, the contractor prepared a master list of some 187 items for exemption from import duty, all of them amounting to Sh19 billion.

The exemptions request was initiated by the embattled Italian firm and approved by the Treasury in accordance with the East African Community Customs Management Act, the Exercise duty Act 2015 and the miscellaneous fees and levies Act 2016.

“We now submit the final version of the master list with the agreed amendments and detailed explanations for the same,” wrote CMC Ravenna in a letter dated May 25, 2018.

Deputy President William Ruto has maintained that no coin will be lost in the ongoing construction of various dams across the country. While ...
News
1 year ago

The letter was the clearest indication that the contractor, now in the eye of the storm, was preparing to hit the ground running for the construction of the dams.

While granting the tax waiver the Treasury noted that the state department of Planning would take responsibility for the items that were granted exemption.

In a paid up advertisement last week, Rotich said Sh12 billion advanced payment was a prerequisite before the government could access the funding.

The facility risked being cancelled if the government did not make advance payments, he added.

According to Rotich, Sh545.9 million and Sh359.5 million were paid as a commitment fee, Sh3.5 million agency fee and a Sh11.1 billion insurance premium paid to the contractor.

Italian firm was paid a Sh7.8 billion advance fee representing 15 per cent of the contract amount.

The Attorney General had approved the financing agreement before it was signed on April 18, 2017, he said.