Sonko reworks 'ridiculous' lion statue after being roasted by KOT 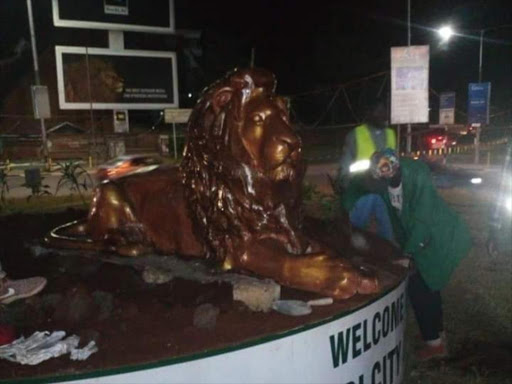 In a move seen as bowing to pressure after an online uproar, Nairobi Governor Mike Sonko on Friday night reworked the lion statue on the University Way roundabout.

On Wednesday, Kenyans on Twitter (KOT) said the previous statue was poorly sculptured and served to bring ridicule to the city other than serve its purpose of beautifying it.

One user remarked that "even the lion himself appears not convinced he's a lion”.

Similar mockery was directed at two lion statues the governor had erected on either side of the entrance to City Hall.

"Give our leaders time to deliver and only judge after the final product," he said.

According to Ogolla, the lion was not a replacement but an improved version of the original statue.

"The statue was subject to improvements on site and so as I initially requested us to give the team time as the sculptor improves the statue on site.

"This was because of the delicate manner of the statue and so it was just a matter of time and so as at now the final touches have been done and the statue is now on point," he said.

In January last year, the Nairobi county government launched a city beautification programme in what Sonko said would put Nairobi at par with the world's best cities.

The programme, whose results are so far impressive, has seen flowers and plash grass planted on major roads and pavements in the Central Business District and its outskirts.

"Nairobi is a commercial hub. We need to invest on transforming it to continue attracting more tourists and investors," Sonko said while launching the beautification programme on January 27, 2018.

When questioned about the tendering process and how the project was being funded, Sonko told the Senate County Public Investment Committee in December last year that the funds were coming from his pocket.

He said he chose to fund the programme because the the facelift programme was not in the county budget.