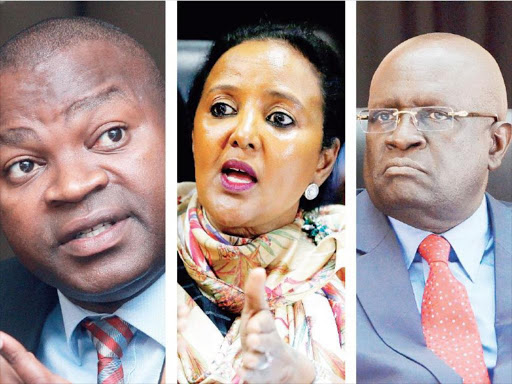 President Uhuru Kenyatta is planning a second and major reshuffle of his cabinet soon after the DCI completes its investigations into the sh63 billion dams project in Rift Valley.

It is understood that the head of state wants to drop all Cabinet Secretaries and Principal Secretaries linked to graft as he works to ensure that his legacy is secured.

DCI Boss George Kinoti is investigating allegations that at least sh 21 billion meant for two dams in Keiyo valley may have been stolen yet it was a loan from the Italian government.

"It will be radical and will mark a fresh start," said an official familiar with the plan.

The President did not reveal why he fired Echesa but speculation is that he could have been sacked for unending controversies that have marked his tenure in Cabinet.

Since he was appointed to Cabinet last year, the youthful CS from Kakamega county had found himself in trouble from one controversy to the other.

Sources within government have told the Star that President Uhuru Kenyatta and Deputy President William Ruto met for hours on Friday morning at State House Nairobi deliberating on a report linking him to some recent arrests.

After the meeting, Uhuru issued an Executive Order which he dropped Achesa from his Cabinet without giving any reasons.

Echesa is a close ally of the Deputy President and it is understood that he was that one who pushed for his appointment to Cabinet despite the former CS only boasting of class seven level of education.

While the Constitution does not give the academic qualifications for one to be appointed to Cabinet, it was only expected of President Uhuru to appoint an individual with post-secondary qualifications.

This week, police also raided a house in Ruiru where over fake Sh32 billion in different currencies and gold was found.

It is unclear how this is related to the developments yesterday but sources indicate that the President is concerned that the saga is linked to some senior individuals in his government.

ANC Nominated MP Godfrey Osotsi yesterday told the Star that the public should not read "too much into the sacking" saying it was the prerogative of the President to re-organise his government as he wishes.

"The President is in order and we should desist from reading too much into this action. If he feels a Minister is not working or incompetent, he can take the necessary action," Osotsi told the Star on phone.

"Of late he has been complaining of corruption and inefficiencies among his ministers and he had warned that he will sack those not working, this could be the reason," he added.

Malava MP Malulu Injendi said Echesa's sacking was a slap in the face for Luhyas.

He said the president should have replaced him with someone from Kakamega county if he felt he cannot perform.

"We're being removed from government as Luhyas. We have many qualified people from Western and the president should have asked us to identify a replacement because the position belonged to us," he said.

Lugari MP Ayub Savula said that hiring and firing of CSs is the prerogative of the President.

"The president knows why he deemed it fit to hire Echesa and why he has relieved him of his duties. I don't know the reasons and I don't want to interfere with the way president Uhuru is running his government," he said.

Kakamega senator Cleophas Malala said the sacking was a loss to, not only, the Luhya community, but youths.

"However, this should be a big lesson to other youths who may have an opportunity to serve in government to prove that they can deliver and the world is yearning for a generational change," he said.

Malala and Echesa have been confrontational to each other on various matters in the recent past.

Navakholo MP Emmanuel Wangwe stated that Echesa's seat was a reward reserved for Jubilee party struggle during the 2017 elections and should not have been snatched from the Jubilee supporters in the County of Kakamega.

"It's the right of the President appoint or fire anybody he wants to, but he should know that selling Jubilee in this region was not a joke, people had to sacrifice for the party to get even the 5 per cent we got in this region and we were glad that our sacrifice had given us the Sports CS Echesa," Wangwe reiterated.

The legislator added that if it was a must that Rashid should be fired then he should have been replaced with another Jubilee supporter from Kakamega.

"If the President could not work well with Rashid, he can work with any other Luhya including me Wangwe, Shinali, Malulu, and many others. We have over 1 million voters from this region and he should have chosen one of them instead of taking it to Luo Nyanza where he didn't get any vote." Wangwe stated.

Orengo said it is a shame that government institutions are quick in conducting sting operations to nab police officers collecting bribes on the roads but going slow on powerful big shots configuring big looting schemes.

"...you cannot fight corruption by arresting police officers who are taking little money along the road. You must go for the big fish," Orengo said, adding that "when you want to kill a viper, you do not go for its tail. You go for its head."

The Senate Minority Leader also said the constitution gives the president the requisite powers to act in confronting anybody who violates the law, including embezzling public resources.

"Article 143 gives the president powers and authority as head of state and government which he needs to exercise in the good of the nation," he said, insinuating that if Uhuru may deem it fit to force people out of offices and lock them up, then he ought not to hesitate.