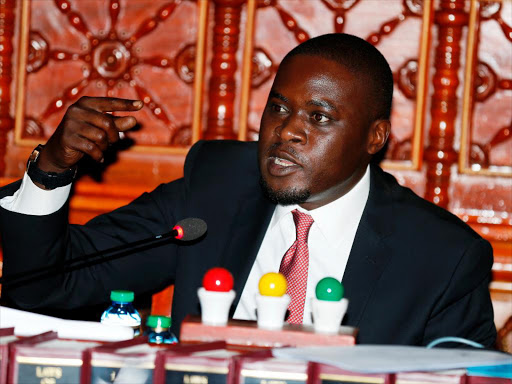 The Senate has summoned Cabinet Secretaries Fred Matiang'i (Interior), Joe Mucheru (ICT) and Attorney General Paul Kihara to appear before them on Monday without fail.

agreed that the three should appear in person and explain the National Integrated Identity Management System popularly known as 'Huduma Namba' process.

The three had failed to appear before the Senate panel to explain the recently rolled out NIIMS.

Matiangi had instead sent CAS Patrick Ntutu who had asked the National Security, Defence and Foreign Relations committee for 14 days to provide the required information.

But Sakaja and the senators were angered by the fact that three did not appear Senate senate on Thursday morning.

"You have 30 senators before you... and the communication was with you by February 22 to appear here. This looks like a delaying tactic," Sakaja said.

"As you are doing that delaying tactic, the process is going on... the Interior PS is in Radio Citizen right now and cannot talk

to senators...AG is saying they are attending the State of Judiciary event."

Sakaja demanded that the three to appear before the

"We shall invite all interested parties. Until then, this process should be suspended...if you are available tomorrow we will sit down and talk.. until then the Senate directs that the matter be suspended until your

that they appear here," he said.

But such a decision to suspend the process can only be taken by the whole House through the adoption of a report.

Earlier, the angered members asked the committee chairman to suspend the registration until they have a discussion with the CSs.

Baringo Senator Gideon Moi said the right to privacy was paramount and must be respected.

will be vulnerable if we allow this process to proceed. I want to concur that until certain issues are straightened

out, we put a hold to this whole process," he said.

Kisii Senator Sam Ongeri termed the process unacceptable adding that the ordinary Kenyans need to understand the whole process before it can proceed.

"This process is critical and I understand where the ministry

might be coming from but I think that this is unacceptable," he said.

Ongeri said the government had failed in securing their own biodata and therefore wanted to stress the citizens.

"It is clear that they have been unable to go through a raft of laws to be able to secure their own bio data. When I went home, Kenyans were asking me, senator what can we do about this matter?" he posed.

"It gets difficult to explain to them on their personal data. We want a substantive bill and a proposal to the two Houses to be able to go through this process so that the Kenyans

He added, "I sincerely request this exercise be put on hold until this matter is unraveled

and sort our through the relevant laws."

pilot project will be done in 15 counties.

Kenyans will be required to register for to access services like applying for an ID, Passport or driving licence or a birth certificate.

Mass registration of persons across the whole country has been scheduled to begin on March 18, 2019.