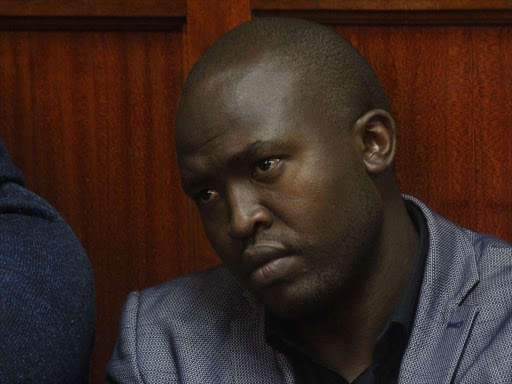 Joseph Waswa in a Milimani court on February 25, 2019. /COLLINS KWEYU

He runs charity initiatives, owns a fleet of four choppers and enjoys the high life. He seems every inch the big-hearted philanthropist. Not any more.

Because of his many magnanimous programmes to help the needy and support community projects, and his inspiring lifestyle, there seemed no reason to question this billionaire status. Kenya is full of them.

Projecting the ideal that so many aspire to, Waswa was untouchable. He took villagers by storm as he tested his choppers and luxury cars.

Said to be eyeing the Bungoma Senate seat in 2022, Waswa was the darling of many due to his charity donations, the Lendrix Foundation and handouts. Who would ever think he was overly generous or question the source of his wealth?

Waswa has donated millions of shillings to construct schools across Bungoma county.

Little do villagers know that their benefactor also runs, or ran, an elaborate scam that conned many Kenyans of their hard-earned cash.

Industrialist Merali, whom he suckered in by mimicking President Kenyatta, is just one of many innocent Kenyans who have suffered.

But on Monday, Waswa — and co-accused Duncan Muchai, Isaac Wajekeche, William Simiyu, David Luganya, Gilbert Kirunja and Anthony Wafula — were humbled when they were cornered and arraigned in court.

They had colluded with government officials and had lured Merali with a promise of giving him lucrative and restricted tenders mainly involving supply of goods.

But is Waswa a stranger to controversy? No.

Demonstrating his high-flying status, the flamboyant politician took a sleepy village in Kitui county by storm in December 2017 when he landed with four helicopters to pay dowry for his wife.

This was no ordinary ceremony in the village. Waswa and his fiancee Maureen Tabitha exchanged rings estimated to have cost around Sh1.6 million in what left villagers reeling in shock.

Many could not fathom what the bride price must have been, but it is believed that tens of millions of shillings were paid.

The four choppers shot laid-back Nzalatani Village into the limelight.

A fleet of high-end, V-8 vehicles were on standby to pick the guests from a playing field, home of the bride to be.

Hotel rooms in Kitui, usually unoccupied except for the December festive season, were fully booked by the Waswa entourage.

Thanks to Waswa and his guests, businessmen including bar patrons recorded booming sales.

Elsewhere, villagers were treated to a night party with plenty of food and drink.

In 2016 Waswa had shocked villagers and the whole of Bungoma county when he offered a helicopter ride to a man who had hung onto a flying helicopter.

Saleh Wanjala, 41, had hung onto the chopper from the Posta Grounds to the Bungoma Airstrip, where he jumped off as the aircraft descended. It was carrying the body of slain businessman Jacob Juma. Wanjala came to be known as the James Bond of Bungoma.

He got a free flight to Nairobi courtesy of Waswa.

Waswa was celebrated for his generosity.

Waswa’s daring fraud against Merali lifted the lid on his run-ins with the law.

In 2014, Waswa was arrested and arraigned at the Bungoma High Court on charges of murdering Mombasa University student Mitch Barasa Kibiti.

The slain student was the son of a former Bungoma chief officer David Kibiti.

The court heard that Waswa shot dead Mitch at his hotel in Kimilili while he was celebrating his birthday with friends.

Waswa was represented by top lawyers, including PLO Lumumba and Cliff Ombeta.

The case is still underway after ballistics reports indicated that the murder weapon was not Waswa's.

In his drama-laden life, Waswa, always accompanied by security guards, was ambushed by Flying Squad officers over alleged threats to the victim's family.

Trouble started when police rearrested Waswa who had just finished the hearing of his murder case.

There was more drama when police and the DPP exchanged bitterly over an alleged bribe from Waswa.

Police accused John Oyimbo representing the DPP of taking a bribe from Waswa.

Police claimed Oyimbo took off of with the prosecution file when they were about to charge Waswa for failing to submit his firearm license that had been cancelled.

Oyimbo had been earlier dropped from representing the DPP in the murder case after Kibiti's family complained of ineffectiveness and aiding the suspect.

Last year, Waswa was again mentioned in connection with how retired judge Philip Ransley was involved in money business.

The former judge had allegedly transferred millions of shillings of his clients’ money to individuals’ accounts.

On June 17, 2015, he allegedly transferred Sh57 million by swift transfer from an account at Chase Bank Riverside branch to Joseph Lendrix Waswa.

It is not clear if the name of this account is associated with the politician, even if the names appear similar.

Ransley, who is wanted by the Director of Public Prosecutions to face charges of embezzling funds, has since fled to England.

Kenya has been seeking Ransley's extradition from London for stealing Sh255 million of client funds belonging to Rowland Minns and Angela Scott.

On December 12, 2018, Ransley failed to show up in Westminster magistrates court where he was fighting his extradition case.

His barrister Malcolm Hawkes said that the retired judge was unwell, but added that talks were going on between Ransley and Minns. He said it was possible that the charges could be withdrawn.