What you assume is menopause could be thyroid disease 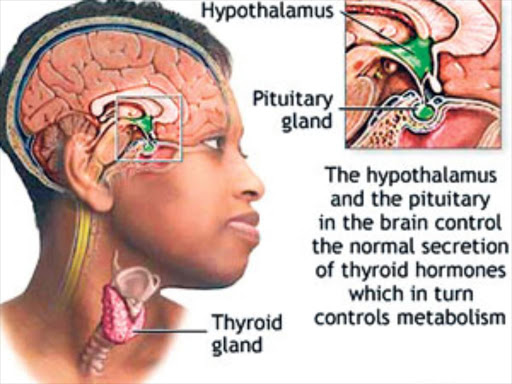 Similar symptoms between menopause and thyroid disease make it hard to tell the difference between the two. /COURTESY

If you have gained weight which doesn’t go away with exercise, not sleeping well and you are a woman in your late 40s or 50s, you are probably thinking menopause.

But don’t jump to conclusions.

These may be signs of thyroid disease.

These similar symptoms make it hard to tell the difference between the two.

Susan Wangari (not her real name), 52, a victim spoke to the Star up to educate many others who are ignorant about the condition.

Hers is a story of how her thyroid condition progressed to goitre without her knowledge.

Susan said it all started with her body weight steadily increasing for six months but she constantly affiliated the symptoms to menopause.

“At 51 years I started adding weight. In six months I had added 35 kilos and weighed 105 kilos. I thought it was a normal side effect of menopause. I went to the gym but I did not lose much,” she said.

She experienced other “simple ailments” but ran to the pharmacy for antibiotics and painkillers for relief.

“Other than the increase in body weight.

I constantly felt unmotivated, but I bought an antidepressant from the chemist. I constantly constipated,

bought laxatives to ease bowel flow. I bought sleeping aid to help me sleep at night,” she recalled.

After one year of recurring symptoms and a visible swelling at the base of her neck, she decided to go for a check-up at the hospital.

The doctor paused a long time on her neck and then asked, “How long has your neck been so swollen?”

Things moved very quickly from there. Within a few days, Susan had an ultrasound and a CT scan.

“I was diagnosed with goitre - a condition that causes the thyroid gland to enlarge to the point where you have a bulge in your neck,” she said.

“At the time I knew nothing about a thyroid disorder. We are told to check our skin for lumps in our breasts but I never heard anyone talk about checking lumps on our neck.”

How much do you know about thyroid disease?

According to Dr Geoffrey Mutuma Hypothyroidism (underactive thyroid disease) which is the most common thyroid disorder comes up when the gland does not produce enough thyroid hormone.

“If hypothyroidism is left untreated, It can lead to goitre, miscarriages, infertility, heart problems and birth defects," Mutuma said.

The right diagnosis and treatment will help you manage a thyroid disorder and its symptoms, he added.

Hyperthyroidism (overactive thyroid) is a less common type of thyroid disease. It occurs when your thyroid gland produces too much of the hormone thyroxine. The effects can be more serious than hypothyroidism.

Up to 60 per cent of those with thyroid disease are unaware of their condition.

Overall, the WHO report said more than 10 million Kenyans have all forms of thyroid disorder in a year.

Despite campaigns and efforts to win the war on thyroid, the situation has worsened. There have been nearly 10 per cent increase in cases diagnosed every year.

Mutuma said this is partly because many of the signs are so common, one can easily miss the correct diagnosis.

with a family history of thyroid problems or diabetes.

Age is a risk factor. The older you get the more prone you are to acquiring thyroid disorder.

Thyroid disorders are often diagnosed around the time of menopause or between the ages of 45 and 55.

“Many women pass off their thyroid issues for menopause because the symptoms are similar and it seems like they’re at the right age," he said.