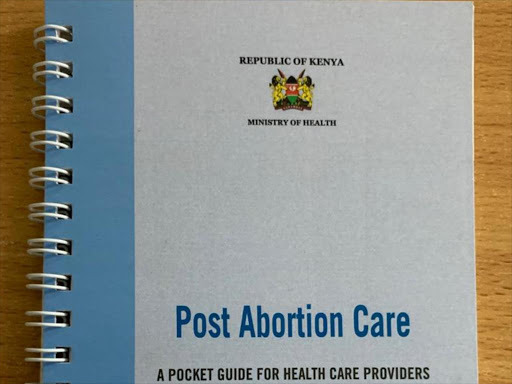 The post abortion care pocket guide approved by the ministry of health. /COURTESY

The ministry of health has approved post abortion guidelines, a pocket guide for healthcare providers on how to handle complications resulting from abortions.

The purpose of the book is to equip service providers with the necessary knowledge and skills on the prevention of post-abortion deaths.

"It will act as a reference for the many service providers who would wish to provide the much needed PAC services but lack or are limited in knowledge and skills," Director of Medical Services Jackson Kioko notes in the book's prologue.

The approval now paves way for PAC training to be carried out in public health facilities.

The PAC guidebook complements the already existing PAC reference manual, PAC curriculum and other training packages offered by the ministry of health.

"The pocket guide should act as a quick reference at the service area and does not, in any way, promote abortion outside the law," Kioko said.

Under the law, abortion is only permitted in Kenya if the life of the mother is in danger.

Article 26(4) states: "Abortion is not permitted unless, in the opinion of a trained health professional, there is the need for emergency treatment or the life or health of the mother is in danger, or if permitted by any other written law."

Article 158 stipulates a 14-year jail term to anyone who attempts to procure an abortion.

Article 159 prefers three-year imprisonment to a woman who procures an abortion while Article 160 stipulates a three-year sentence for anyone who supplies drugs or instruments to procure an abortion.

This evokes memories of the recent death of human rights activist Carolyne Mwatha who an autopsy report revealed that she died from excessive bleeding after a botched abortion.

Doctors said the skull of her five-month unborn son was crushed, his brain sucked out and one of his arms was missing.

Kioko said the guidelines, which will be launched officially soon, were developed following wide consultations between the ministry's Reproductive and Maternal Health Services Unit and experts.

"It is envisioned that the use of this pocket guide will contribute to the universal health coverage and by extension Vision 2030 through improvement of maternal and newborn health in Kenya," said Kioko.