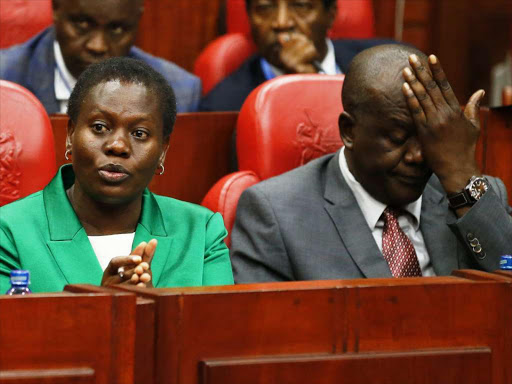 Lands CS Farida Karoney (L) with CAS Gideon Mung'aro when they appeared before the joint Committees of Lands and Environment on the gazettement of 200acres of forest land for economic development on Ndaragua township. August 28, 2018. Photo/Jack Owuor

The report cites ‘glaring discrepancies and inaccuracies’ in the ministry’s financial statements, undisclosed pending bills and unexplained compensation of employees, among other accounting issues.

Ouko’s report came a week after the Ethics and Anti-Corruption Commission raised a red flag over weak processes and systems at the ministry.

The EACC particularly raised concerns over cases of double registration of land, forgery, missing files and illegal approval of buildings.

Ouko flagged discrepancies in figures captured in financial statements and those in trial balance amounting to Sh16 billion.

For instance, at the end of the financial year cash in hand as captured in the financial statement was Sh201,038, but the same item has a corresponding entry of Sh8.2 billion in the trial balance.

In a recurrent bank account, the balance was Sh1.8 million against Sh1.8 billion declared in the trial balance as at the end of the financial year.

The accounting officers in the ministry headed by CS Farida Karoney could not justify the differences.

“In the circumstances, the accuracy of the financial statements for the year ended June 30, 2018, could not be confirmed,” the report reads.

Ouko questioned the Sh2 billion expenditure on compensation of employees.

The money, though spent on compensation, was charged to acquisition of utilities, training expenses, communication, vehicle maintenance, fuel and purchase of office furniture.

The ministry made payments amounting to Sh363 million for goods and services delivered and invoiced in the previous year but were not captured in the accounting books as pending bills.

Ouko questioned the Sh946 million pending legal bills not disclosed in the ministry’s books at the end of the financial year.

The auditor general flagged payment of Sh112 million to Finance Limited Bank. The bank sued the Commissioner of Lands for preparing and executing a title deed with full knowledge that the property was registered to another party.

“This is against the Public Officer Ethics Act that requires public officers to carry out their duties to the best of their ability,” the report reads.

Ouko flagged Sh8.6 million per diem paid to a team that took part in a joint inspection of the Kenya-Ethiopia boundaries pillar in May 2017 for 30 days.

The inspection was carried out in the previous financial year but payments were made in January last year.

There was no approval for the team to conduct the inspection without per diem and to be refunded later. “It was not clear on what basis the activities were allowed to be undertaken in the absence of the funds,” Ouko said.

Post a comment
WATCH: The latest videos from the Star
by By JULIUS OTIENO @juliusotieno04
News
23 February 2019 - 00:30
Read The E-Paper