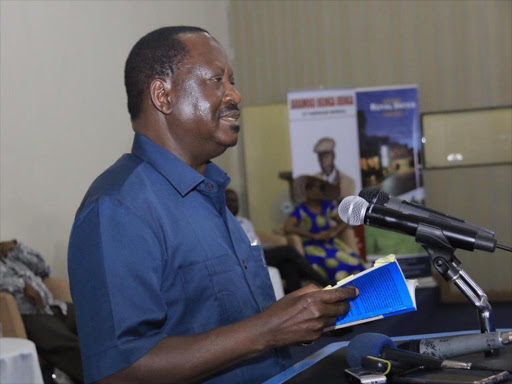 ODM leader Raila Odinga has pleaded with striking nurses across the country to resume duty for the sake of suffering patients.

Speaking during a funeral ceremony in Samia sub county on

Saturday, Raila said all parties in the dispute need to consider the option of an amicable solution for the ongoing strike.

“The county and national governments should sit down and find a lasting solution to enable the country to function smoothly,” he said, adding chest thumping is uncalled for.

He pleaded with the nurses to report to duty on

adding that the union officials should adopt a reconciliatory approach to the issue.

Atwoli argued that Oparanya should have consulted him on the workers’ issues instead of displaying ignorance on national television.

He argued that the Council of Governors signed Collective Bargaining Agreements (CBAs) with the nurses and they need to honour the same.

“If you realise that you do not have money and you owe someone, just go back to them and explain to the modalities of payment even if it means paying in instalments,” he said.

“They left Uhuru to read a speech on petty issues,” he said.

Atwoli said the President meant well for the country and should not be made to carry out tasks meant for shop stewards.

February 15, warning that those who failed to do so risked being sacked.

A number of nurses from various counties have however defied the presidential order to return to work leaving patients in public health facilities to suffer.

A meeting planned by Busia County government scheduled for

morning aborted when the nurses’ union officials failed to turn up.