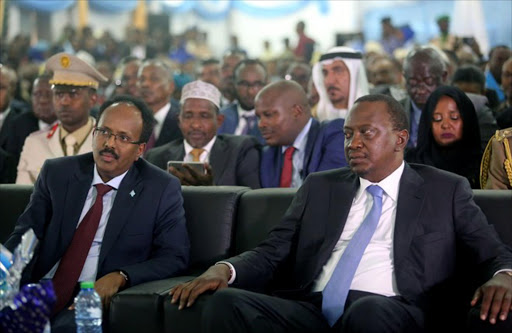 Kenya has declared its northern neighbour Somalia an enemy state for

allegedly auctioning oil and gas blocks falling within the Kenyan maritime territory near its border early this month.

the generosity and good neighbourliness that Kenya practices

being taken advantage of and that the country is ready to defend itself by all means.

The PS said the move by the Somalia government was "an outrageous and a provocative act of aggression which will be met with unanimous and resounding rejection by all Kenyans and people of good will who believe in the maintenance of international law and order and peaceful and legal resolution of disputes."

As an immediate response, the PS announced that the Kenyan Ambassador to Somalia Lucas Tumbo has been recalled.

He added that the Somali Ambassador to Kenya Mohamud Ahmed Nur

who presented his credentials to State House in December last year has also been ordered to leave Nairobi immediately.

Kenya and Somalia have

had a protracted dispute over a maritime boundary which escalated in 2014 when Somalia sued Kenya at the International Court of Justice.

Macharia said Kenya has always pushed for diplomatic and peaceful resolution of the conflict by engaging in negotiations and submitting itself to the international courts' processes.

Macharia, however, maintained the country's claim over the disputed boundary area, saying it is historically Kenyan.

"[Kenya]..has severally and emphatically stated its unequivocal claim of the maritime area that is known to be historically Kenyan," she said.

He said it is regrettable

that the neighbouring country chose the path of aggression despite Kenya having stood with it during many years of political and humanitarian hardships.

Kamau said the Kenyan government got alarmed when on February 6, it noted that the Somali government had displayed the oil and gas blocks within the Kenyan territory for auction in London and then complained formally but no action was taken.

"The government summoned the Somalia ambassador and demanded the withdrawal of the incorrect maps displayed at the conference and cessation of the oil and gas blocks in the Kenyan territory," he said.

Kamau said the ambassador confirmed that he had transmitted the complaint to the highest level of the Somali government.

Kenyan Ambassador in Mogadishu was also instructed to register the protest with the Somali government and was confirmed as received, the PS said.