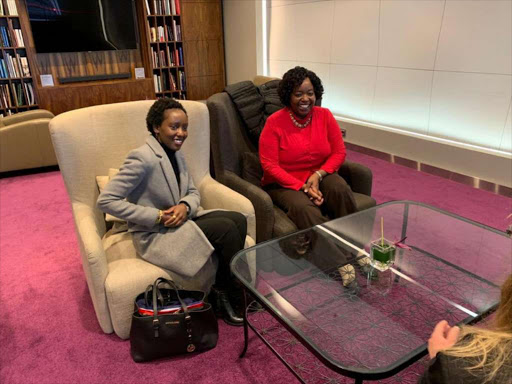 June is the daughter of Deputy President William Ruto.

Foreign Affairs CS Monica Juma posted photos with June as she received her in Warsaw where she is on a diplomatic trip.

“Arrived in Warsaw, Poland, this morning to attend the Warsaw Summit which will be looking at security in the Middle East, taking place tomorrow. Was received by June Ruto, Charge D’Affaires,” read the tweet.

Both the Ministry of Foreign Affairs and Ruto’s office denied the rumour.

America directorate at the Ministry of Foreign Affairs.

She currently serves as one of the senior-most ranks in Foreign Service. As

a Charge D’Affaires, she heads an embassy in the absence of an ambassador.

Kenya does not have an official embassy in Poland.

The ambassadorial role has elicited reactions on social media.

“Hey! June Ruto again in Poland. Whereas jobless graduate, we are only left to foolishly sing for 2022. God have mercy on us,” Cheruiyot Timothy said.

“Outside of blood link, and certainly appointment connection, June Ruto is good. As Charge D'Affaires in Warsaw, Poland, that’s quite a quick rise... “@Oleshiitemi

"So June Ruto, daughter of DP Ruto is Kenya's ambassador to Poland? I feel cheated, I feel betrayed, I feel used, I feel like a voting machine, I feel like half Kenyan, "@Allen Arnold

“If June Ruto the daughter of William Ruto is ambassador to Poland and if true, I take it as a pure case of abuse of office by the Deputy President himself and the Foreign office in Kenya. This must be brought to public attention,” Cheruiyot Chebotuiya tweeted.

“Did you just say "received by June Ruto". I now completely quit on my country," Samuel Kamau tweeted.

“Does Kenya have an Embassy in Poland? If Yes, since when and if no, then what’s June Ruto representing us there? This country is

Post a comment
WATCH: The latest videos from the Star
by LYNDSAY NYAWIRA @LyndsayNyawira
News
15 February 2019 - 15:00
Read The E-Paper