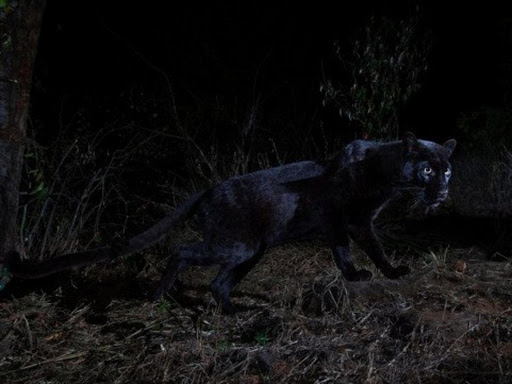 Spotted: a rare sighting of the black leopard in Laikipia./KWS

Oscar award winner Lupita Nyong'o has waded in on the debate of the rare black leopard sighted in Kenya.

Lupita said where and when the animal was photographed does not matter.

caught on camera 'properly' in Africa for 100 years.

But the country's local media and Kenyans said the feline had been photographed in 2013 by a local journalist.

"Whose account of reality matters? Rare #BlackPanther sighting perspective," Lupita who also featured in the 'black panther' movie said via Twitter on Friday.

among her followers both from Kenya and abroad.

@Unitynow8 said, "I just hope they stay safe from poachers."

"Tell it @Lupita_Nyongo .. what matters most is he is alive and well .. show them #BlackPanther ," @milumilucouture said.

@QuitaQuita41 said "This deep. They even wanna control narratives about animals."

"I gave up on white people and discovery after they discovered mt Kenya with the help of a Kenyan guide?" @murithievans7 said.

@BrandonPilcher said "Personally, if the Kenyans say black leopards have been living in the country for some time, I don't see any reason to doubt them. Melanism can occur in any leopard or jaguar population as I recall."

@Tndunda1 said, "The "rare sightseeing" is the best perspective. We may receive more tourism revenue besides boosting the KQ's Nairobi to NY flights. The other perspective takes a tone that further polarizes societies. That said, for Kenyans, know, document and market your wildlife better!

"The Local Photographers who Photographed earlier didn't have much power to make it trend.... and perhaps didn't know what they had captured was big news,"@kings_ori said.

@o_gaston said, "I agree with you on that though...perspective matters."

"If you're Kenyan blood you wouldn't buy that sort of nonsense,g'damt these animals have been here for long,"

@Rowbowz said "The days of white people discovering what our ancestors already had or knew are over."

The creature - which almost has a mythical status - was captured by British wildlife photographer Will Burrard-Lucas, 35, while it was prowling around the plains of Kenya in the dead of night with a full moon looming above.

In a video documenting his photography expedition, Burrard-Lucas explains, "As far as I know none of these leopards has been photographed properly in Africa before... So I’ve left the cameras for a few days and now I’m heading back to see if I’ve got anything."

The main areas, where black leopards are found are the Aberdare mountains, Mount Kenya, Mount Elgon and Laikipia.

Musyoki said it is not something new to those in conservation cycles.