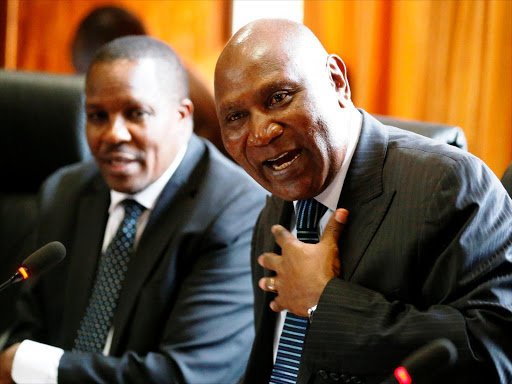 Auditor-General Edward Ouko with Clerk of the National Assembly Michael Sialai when they appeared before Public Accounts Committee on January 12, 2019. /Jack Owuor

In his 2017-18 report, Ouko exposed what could be one of the stinking rot on how state-funded institutions misuse public money in questionable spendings.

This means the university spent close to a million shillings to procure the sets with each costing Sh 910,689.

Ouko’s report further revealed the Coast-based university did not get value for money since the supplier delivered 65 inch-size screen instead of the 70 inch-size television sets in the supply order. TUM, in what is also raising eyebrows, breached the procurement laws in the manner it procured the suspicious TVs

“The audit revealed procurement was done through requests for quotation contrary to the Public Procurement and Disposal Act, 2005,” Ouko said in the report.

The report also revealed that the university could not account for up to Sh6,300,000 it claimed to have paid out as gratuities to staff.

The institution could not back the payments with supportive documents as required.

TUM had Sh 1,1 billion budget for personal emoluments during the year under review but spentSh 1. 4 billion during the same period without any justification.

“The funds could have been allocated to other deserving areas that would improve delivery of goods and services to the University. This may also be an indication of poor planning and the management may need to re-think on its budget making process in view of focusing on more priority areas,” report reads.