Police on the spot over missing Dandora activist 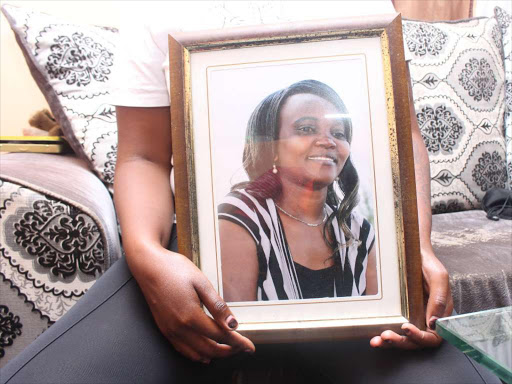 A senior official of a humans rights lobby involved in documenting cases of extrajudicial killings in Nairobi’s Dandora has gone missing.

Caroline Mwatha, a founding member of the Dandora Community Social Justice Centre, was last seen on

The centre has been lobbying and calling for police professionalism, accountability and an end to extrajudicial killings and enforced disappearances.

Caroline's colleague said she had received threats from police officers. Her family is worried that she could become part of the statistics she documented.

She was committed to highlighting the ills committed by rogue officers. Concerns of her whereabouts grew after she failed to report to work on

Wednesday. She is reported to have worked on Tuesday.

Wednesday, she took her daughter to school but failed to report to work. On Thursday, her colleagues’ efforts to reach her on the phone proved futile. Her phone was switched off.

A friend also claimed to have called her at around 6 pm on Wednesday but her calls went unanswered. The centre sent one of her co-workers to her place. She found her 13-year-old daughter alone in the house. Her disappearance was reported to Buru Buru police station on Friday.

“We are doing everything we can. We believe she is still alive because my son and her friends went to look at every mortuary, but she was not there,” Mbai told the Star at his Dandora home.

Buru Buru police officers have so far recorded statements from her neighbour and parents. The parents live a kilometre away from Caroline’s house. The police are today expected to get a report from Safaricom on her call logs.

Buru Buru deputy police chief Stephen Okal yesterday said they had yet to make any headway in their search. “So far we’ve not established where she is,” he said.

Caroline is a mother of two — the girl and a 15-year-old student at a city boarding secondary school. The girl now stays with her grandparents. Caroline’s husband works in Dubai. He is expected in the country today.

There were anxious moments yesterday when members of the lobby were informed of a body found in Nairobi River. They all rushed to see the body, but it turned out it was a man’s.

“Amnesty International Kenya calls upon the Directorate of Criminal Investigations and the National Police Service to thoroughly investigate Carol’s disappearance, establish her whereabouts and deliver her to her friends and family” executive director Irũngũ Houghton said in a statement.

Caroline was heavily involved in the documentation of extrajudicial killings in Dandora.

Centre coordinator Wilfred Olal yesterday said that activists and the police do not have a good relationship.“When you are dealing with police killings, you target specific police officers and they have not been very kind to us,” he said on the phone.

“The killer police have been very hostile and have been issuing threats to some of us, including Caroline.”

Olal had previously accused people suspected to be police of trailing, intimidating and killing witnesses. The centre has also been linking victims’ families to the media so they can speak up.

Buru Buru police boss Geoffrey Mayek told reporters the six were shot dead after stealing a motorcycle and gang raping a passenger. Witnesses disagreed. Through the Dandora Justice Centre, witnesses recounted how the officers chased two suspected gangsters who had reportedly raped a woman and stolen a motorcycle.

One suspect was shot dead while the other climbed a roof to escape. The roof, according to the centre, caved in. The suspect landed in the house where three people — David Kariuki and his nephews — were sleeping. The officers nabbed the suspect plus the trio and marched them to an open ground where they were executed.

Kariuki’s nephews, Kisii University student Peter Mwangi and a Murang’a School student identified as John, had visited for the holiday.

Another victim, a 23-year-old student, had climbed a tree to have a glance at what was going on in the neighbourhood.

The police spotted him, ordered him to come down and shot him despite his pleas. The killings triggered a public uproar. The cases are under investigations by the Independent Oversight Policing Authority, the Independent Medical-Legal Unit and the International Justice Mission.

The centre has also been pursuing the August 26 shooting of five suspects at the Dandora Phase II dumpsite. The police claimed they were peddling drugs and were armed. The officers set their shanty aflame after removing the bodies. They were Fredrick Ochieng’, Vincent Mandu, Alex Githuku, Davis Tekei and one identified as Chege.