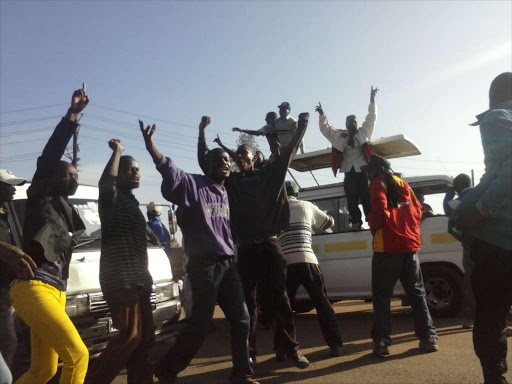 Touts during protests in Kasarani . FILE

Matatu touts are meeting secretly twice a week to plan how to block the launch of the Bus Rapid Transit (BRT) vehicles.

They have accused matatu owners’ officials of betraying them and ignoring their rights.

Matatu touts chairperson John Adan on Saturday in Githurai 45 said the officials are mum on the BRT issue and they may be compromised to side with the state.

During the meeting, the touts resolved to frustrate the state and block the BRT launch.

The touts alleged that matatu owners are not interested in the welfare of managers, drivers and touts.

One matatu employs at least three Kenyans – the driver, the company manager and the touts.

Last month, matatu owners from Mount Kenya region said the BRT system will ruin their business. They asked President Uhuru Kenyatta to stop the implementation of the BRT. They said the system is designed by unscrupulous individuals out to make a killing from it.