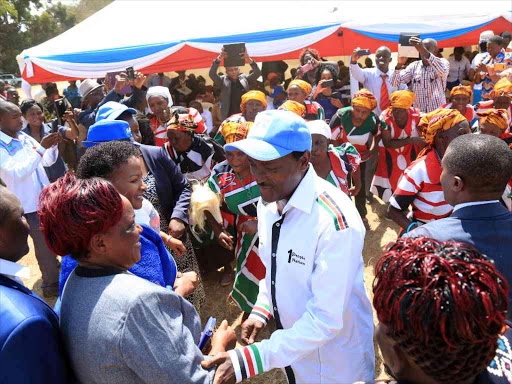 Alfred Mutua of Machakos, Kivutha Kibwana of Makueni and Charity Ngilu of Kitui failed to show up in the Kamba Leaders Convention at Kiamba Primary School, Matungulu.

The no-show is seen as an apparent rebellion against the Ukambani kingpin.

Kalonzo, however, said there is no rebellion in Ukambani. He said the perceived rebellion was a sign of democracy.

This was the second time the county bosses skipped Kalonzo’s meeting.

On January 29, the trio skipped a goat-eating meeting called by Kalonzo at his Yatta farm, Machakos.

Ngilu and Kibwana had been invited to the meeting.

Rebellion has been growing against Kalonzo, who has for three decades dominated Ukambani politics.

This after the governors formed South Eastern Kenya Economic Bloc (Sekeb), to rally the Kamba community behind a different political direction ahead of the 2022 General Election.

On Friday, Kalonzo said he attempted to reach out to the governors to attend the meeting, but none responded. “I called Mutua but was unable to reach him. I called Kibwana but he is away in Korea. Ngilu was willing to attend but is afraid of Wiper supporters,” he said.

In a veiled attack on the governors, Kalonzo criticised people he said has been bashing him for failing to develop the region. “You climb on Kalonzo’s shoulders then you become a governor or an MP. Then you start abusing and hurling all insults at me,” he said.

“You think Kalonzo has not done anything? If I did not team-up with Mwaki Kibaki and bring Raila Odinga on board in 2007, where would Kenya be today?”

He warned leaders against inciting the residents.