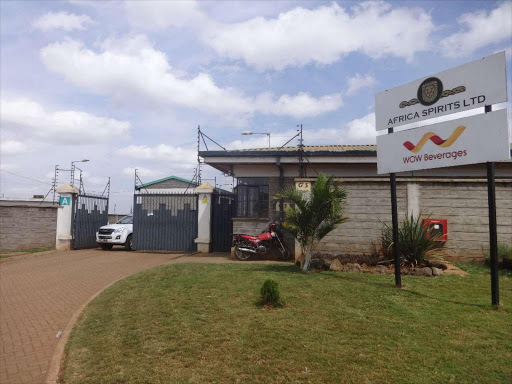 Africa Spirits Company that was seized by the state on Friday.

The government has closed Africa Spirits Limited, a liquor manufacturing company in Thika, over claims of massive tax evasion and production of counterfeit brews.

KRA has demanded that it show cause why its licence should not be revoked. DCI and Kenya Revenue Authority officers carried out a joint operation at the company on January 31. They said they had intelligence showing the company was using fake KRA stamps.

DCI chief George Kinoti on Friday said they had seized the firm’s servers to retrieve information that will be used to consolidate evidence. “Investigations are in top gear and I’m very sure we will win this case,” he said.

The detectives said the company had allegedly been smuggling illicit ethanol from Tanzania. During the raid, they seized 312,000 litres of ethanol with an estimated Sh1.2 billion tax worth. They also seized 21 million fake excise stamps, they said.

Inspector General of Police Joseph Boinnet and Kinoti inspected the factory on Friday.

They said a thorough probe into the racket is underway. Boinnet described owners of the company as criminals endangering the lives of Kenyans through production of counterfeit liquor.

“These people ought to be behind bars. They have imperilled the lives of Kenyans by manufacturing of fake brews. Besides, they have not paid billions in taxes,” he said.

The police boss said the company’s owners have gone into hiding but officers are looking for them.

“They know they have been in wrongdoing all along and that’s why they are hiding. Why run away if they have not done anything wrong?” Boinnet said.

“With the 21 million fake stamps that have been seized, we could have lost Sh1.2 billion. In a single shift, we lose Sh93 million. Therefore, we estimate that in a month we lose Sh3 billion,” he said.

Three workers were arrested at the company on January 31. One, a production manager, was arraigned on February 1 and held for seven more days to facilitate investigations. The other two were junior workers and were released.

Boinnet warned unscrupulous government officers who have been abetting crime that they will be held to account.

“We will investigate how the illicit ethanol was smuggled into the country, starting from the border up to the factory. All those who slept on their job will be held to account,” he said.