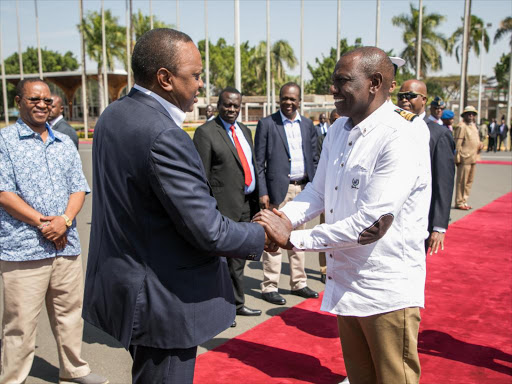 President Uhuru Kenyatta is seen off by DP William Ruto at JKIA as he left for Ethiopia on Saturday, January 9, 2019. /PSCU

President Uhuru Kenyatta left for Addis Ababa on Saturday to attend the 32nd Heads of State and Governments Summit of the African Union.

Uhuru, who was accompanied by First Lady Margaret Kenyatta, was seen off at the Jomo Kenyatta International Airport by senior Government officials led by Deputy President William Ruto.

The Summit kicked off on January 15 and will run till February 11 under the theme “Refugees, Returnees and Internally Displaced Persons: Towards Durable Solutions to Forced Displacement in Africa”.

The session between January 15 – 16 was allocated to the 37th Ordinary Session of the Permanent Representatives’ Committee (PRC).

African Union Assembly of Heads of State and Government

is one of several

African Union. The other bodies are the

Executive Council, consisting of foreign ministers of the AU members states; and the