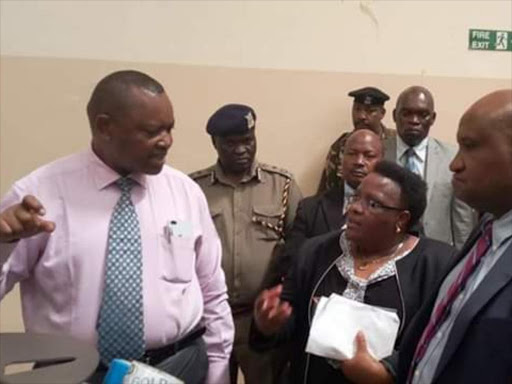 The Kenya Revenue Authority and the Directorate of Criminal Investigations have launched investigations into the activities of Africa Spirit Limited based in Thika.

This is after large consignments of counterfeit excise stamps and suspected illicit ethanol were found within their premises.

An estimated 21 million counterfeit excise stamps and 312,000 litres of illicit products valued at Sh1.2 billion in estimated tax were seized during the operations which commenced on January 31.

In a statement by KRA on Thursday, arrangements are in progress to seal the premises to enable in-depth investigations into the racket.

The factory's production manager was arraigned in court and detained for seven days to facilitate further investigations.

Inspector General Joseph Boinnet said the company was possibly evading tax and manufacturing counterfeit products that could be harmful for human consumption.

alerted of the possibility that they are manufacturing fake and counterfeit liquor and a possibility of tax evasion and that is why the DCI and our colleagues from KRA decided to pick up on that information, mounted an operation and confirmed our suspicions," Boinnet said during a press briefing on Friday.

"This is a case of massive tax evasion and manufacture of outright fake and counterfeit products that imperil the health of those of us who consume alcoholic beverages," he further said.

The Directors of the Company and other senior management are also being sought.

The operation is part of the government's ongoing campaign against illicit trade aimed at ensuring compliance with tax and consumer protection laws.

The Anti-Counterfeit Agency has announced plans that will elevate its efforts in fighting illicit trade with the full backing of the government.

The agency's executive director Elema Halake said the plan will make the agency an authority, affirmed with the responsibility to help in policy formulation in the Ministry of Trade and research organizations.

ACA is part of Multi-Agency Anti-Illicit Trade Outreach (MAAITO) comprising of the Kenya Revenue Authority, the Kenya Police and the Kenya Bureau of Standards.

The agency seized illicit goods worth more than Sh80 billion between June and September last year.

“This gives us an opportunity to enhance our private sector collaboration initiatives. We are delighted that more enforcement and inspection officers under the agencies will be trained on how to identify counterfeit goods,” Halake said.