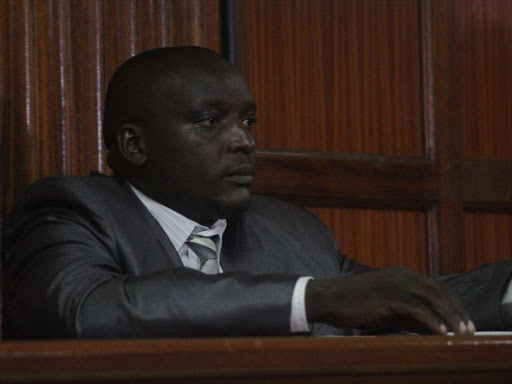 Former Ruaraka OCS Nahashon Mutua at a Milimani on Thursday,February 07 during the mention of his case of killing an inmate in 2013.His sentencing will be on Thursday next week.PHOTO/COLLINS KWEYU

A former OCS found guilty of killing an inmate in December 2013 wants the case investigated afresh.

Nahashon Mutua, 40, was in December last year convicted for the murder of Martin Koome.

Koome, a miraa trader, had been arrested over domestic dispute and booked at Ruaraka police station, where he was tortured to death.

Mutua says he is innocent and his conviction was as a result of false statements given by Koome’s cellmates.

He says Koome’s cellmates are responsible for the injuries inflicted on the victim that resulted to his death.

In mitigation, the ex-cop told Justice Stella Mutuku the matter should be investigated afresh, because he is also a “victim” of Koome’s death.

Mutua’s sentencing will be on Thursday next week.

Mutua sought a non-custodial sentence, saying there is doubt if he committed the offence.

“I will adhere to all directions and orders if given a chance of a non-custodial sentence,” he said.

In a pre-sentence report, Mutua’s former colleagues described him as a competent and hardworking officer. Some junior officers said he was a mentor, skilled and confident in handling affairs at the station.

The officers said Mutua is the victim in the case as there were attempts to extort money from him. They said he could have risen through the ranks.

Local administrators said they knew Mutua as a strict public servant, who did his work diligently. However, the public were not sympathetic with Mutua’s conviction. They described him as “brutal”.

Mutua was born on July 16, 1978, in Nyandarua. He is the ninth child in a family of 13. He attended Kipkabus Primary School up to Standard 8. He went to Warreng Secondary School in Eldoret, where he sat his KCSE exam and got a mean grade of A-.

He studied production engineering at Moi University main campus and graduated in 2003 with a second class honours upper division. He was recruited to the Kenya Police as a constable in 2004. He rose through the ranks to be named Ruaraka OCS in 2015. He has a wife and six children. His wife says Mutua’s predicament has psychologically affected her three eldest children.

Mutua’s parents – Hezron and Mary Mutua – want him given a non-custodial sentence.

But Koome’s family have opposed a non-custodial sentence, terming it a “mockery of justice”. They said they were horrified by the brutality meted on Koome even after he cried out for mercy and forgiveness. They called for the maximum sentence for the offence.

Koome was 36 years at the time of death. He was from Runogone, Meru. Koome was the father of a nine-month-old child.