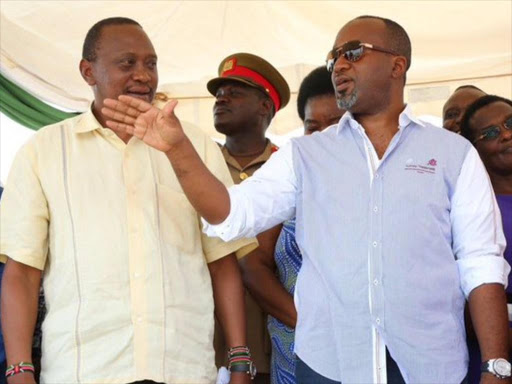 President Uhuru Kenyatta with Mombasa governor Hassan Joho when they met in the county in January this year. Photo/FILE

Governors want their term limits removed to allow them seek re-election as many times as possible.

A draft document by a special committee preparing for a possible referendum on behalf of the Council of Governors proposes that county bosses be allowed to contest elections beyond the ten years limit.

They argue that its unfair to limit them two five-year terms when other elected leaders like MPS and MCAs are allowed to run for office as may times as they wish.

The proposal is in its initial stages. The committee, co-chaired by Makueni Governor Kivutha Kibwana and Kiraitu Murungi of Meru, has only met once since it was constituted last October. It is expected to meet again within the next two weeks to firm up its proposals.

Yesterday, CoG chairman Wycliffe Oparanya said he was yet to see the report. Once it is presented to him he will call all the governors to a retreat so they can adopt a common position, he said.

In October last year, the CoG backed calls for a referendum to change the Constitution on condition that the changes would increase allocation of cash to the counties.

Once the eleven-member committee completes its proposals it will present them to the Building Bridges team.

The committee has proposed that counties' allocation be increased to at least 45 per cent from the 15 per cent based on the current budget.

At the moment the central government gives counties 15 percent of the audited budget.

The special team has also proposed reduction of MCAs’ powers to make it difficult for them to impeach a governor. Specifically, they want the law to provide for a two-thirds majority of MCAs to remove a governor from office.

Previously MCAs have fought battles with governors and attempted to remove them from office on flimsy grounds.

It emerged yesterday that pro-referendum agents face obstacles in their push to amend the law even as plebiscite calls appear to have lost steam in the recent weeks.

Sharp differences among the political class over the country’s preferred system of governance remain the elephant in the room amid extreme views.

Deputy President William Ruto, who was initially seen as the face of the anti-referendum brigade, has backed the law changes but vehemently opposed creation of more positions at the top.

However, his political nemesis ODM chief Raila Odinga is said to be rooting for an expanded system of governance that reintroduces the powerful prime minister and a ceremonial president.

Serving his last term and legacy-focused, President Uhuru Kenyatta has sent out mixed signals on the clamour for a referendum.

At some point Uhuru said he would support calls for a referendum to deal with the “winner takes it all syndrome”, saying that would cure tribalism.

There have been past failed attempts to amend the Constitution.

In 2014 , CoG under the leadership of Bomet Governor Isaac Ruto attempted to push for a national referendum to amend to Constitution to give counties at least 45 per cent of the national revenue but the initiatuve soon ran into headwinds.

So was the one by Coalition for Reforms and Democracy (Cord) that went as far as collecting the pre-requisite constitutional one million signatures.

However, Cord’s dream died after Independent Electoral and Boundaries Commission found out that the collected signatures were not authentic.

Then in 2015 came the senators’ attempts to push for a national referendum to ensure a more empowered Senate and to strengthen devolution, but it fizzled out.

Experts caution the same fate that has met the previous attempts could also befell the current cause unless it gets political goodwill across the board.

The first challenge that is likely hamper the referendum push could be failure to build consensus on referendum issues.

National Assembly Majority Leader Aden Duale yesterday said apart from the challenge of striking common ground, the country at the moment has no law to guide a referendum.

"If the people of Kenya will decide they want to move from a Presidential system to a Parliamentary system, I have no problem. Unlike before, everybody, every party and every region will have a chance to present their question or questions. So how to marge these questions and get uniformity on the sets of questions to be put in a referendum will be a battle," Duale said.

The Garissa MP added: "Those who want a referendum, we are telling them we are fine, the Constitution provides for that. It is unfortunate that as of now, we have not enacted a referendum law so even how to conduct referendum, the process are not anchored in law".

He said it is important for the country to develop a referendum law before embarking on calls for the plebiscite noting that his Jubilee Party was not likely to present views to the Building Bridges Initiative task force formed by Uhuru and Raila.

“We have not given a position as a party as of now. Whether we want to have a referendum as a party is a decision that will be made by the top organ of the party - the National Governing Council chaired by the President," he said.

Makueni Senator Mutula Kilonzo Jr said if there will be any referendum, it will only require "roughly a year to start and finish the process".

He said if the issues will be more than three, otherwise it will fail.

"Any amendments that may follow will have to be put in law within a tight legal framework. In 2010, then Justice Minister Mutula Kilonzo did an A to Z of the road to August 2010 and the transitional period. Nothing stops us from doing the same," he told the Star.

Mutula noted that while it is necessary to have a referendum law in place, lack of it cannot be reason to stall the process.

" An agreed framework can easily chart the course," he said.

The other headache that will face the proponents is the mode to adopt. It can either be the popular initiative or the parliamentary initiative as stipulated in Articles 256 and 257.

If the proponents for the plebiscite will opt for parliamentary initiative, then the huge task will be marshaling the requisite numbers to push through at least 233 of 349 (two-thirds) legislators of the National Assembly to vote in favour.

The ruling Jubilee alliance enjoys numerical strength in both Houses and it will be a major test for the Raila team.

If they opt for the popular initiative which requires collection of 1 million signatures from registered voters, the proponents will not have much challenge but the trap lies in the verification of the signatures to ascertain whether those who signed up are genuine registered voters.

If verification and certification of signatures will be successful, the next challenge will lie in the county assemblies.

At least half of the county assemblies are required vote in favour before the proposal goes to Parliament and if half of each house (half of the total number) vote in favour, the President will then sign. And if either House of Parliament does not pass it, it goes to a referendum.

And here comes the other hurdle, the pending reforms at IEBC.

Currently, the electoral agency has three commissioners: Wafula Chebukati (chairman) and commissioners Abdi Guliye and Boya Molu. According to the IEBC Act 2012 (Clause 5 ), it lacks a quorum to conduct business.

The plenary activities of the commission were paralyzed last year following the resignation of former vice chairperson Consolata Nkatha and commissioners Paul Kurgat and Margaret Wanjala and Roselyn Akombe who quit days before the October 26 repeat presidential election while CEO Ezra Chiloba was fired.

Currently, the National Assembly is grappling with how to come up with the law that will put in place a procedure for replacement of a commissioner who have quits. At the moment there is no law and how MPs will go about it will determine the earliest time the country can hold the referendum.

Then there are the budgetary challenges. This year the country is expected to conduct a national population census costing the taxpayer Sh18.5 billion.

The amount is expected to be allocated to the National Bureau of Statistics in the 2019/2020 budget, meaning if the national referendum is to happen, the earliest could be sometime next year after the 2020/2021 budget in June 2020. Will MPs allocate the monies to the plebiscite?

Experts estimate that the next referendum could cost the taxpayer close to Sh25 billion.

Ndaragwa MP Jeremiah Kioni said those calling for a referendum to amend the Constitution were wasting time, saying the exercise is costly and not easy.

“Change of the Constitution is expensive and involves many processes including being passed by Parliament. I was among those who participated in the making of the current laws and I want to say it’s not easy. Even changing a word alone is hectic,” Kioni he said on Sunday at a function graced by tDP William Ruto.