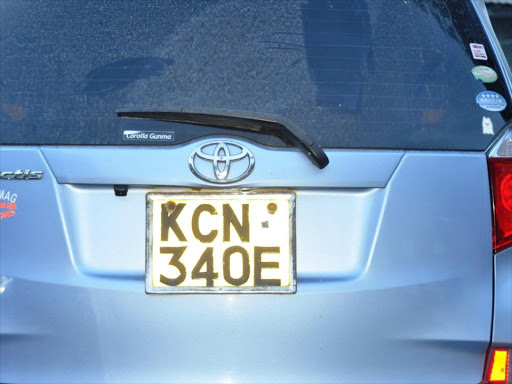 The car with a similar number plate as the one used during the Dusit attack. /KURGAT MARINDANY

Six NTSA officials will remain in custody for 30 days after the Anti-Terrorism Police Unit on Friday obtained orders to detain them.

They are director of registration and licensing Jacqueline Githinji and her deputy Cosmas Ngesa.

Officers are investigating the registration of a car used in the Dusit attack.

This raises the number of NTSA officers in custody to seven.

Another official, Augustine Musembi was detained on Wednesday.

ATPU is investigating how two cars, including the one used by attackers at the hotel complex, were issued with similar registration numbers.

ATPU inspector Monicah Githaiga said she needs to analyse call data records and financial records of all the suspects to find out if they aided the attackers who killed 21 people and injured scores of others.and

Led by John Arwa, the defendants' lawyers argued that the state had not explained to the court how the detention of their clients will help the detectives.

Arwa said the state is seeking incarceration of the suspects without disclosing what they have done to be investigated.

State counsels Duncan Ondimu and Eddie Kaddebe who filed Githaiga's affidavit in court said the NTSA offices have been declared a crime scene and the ATPU is interviewing all the road safety agency's officials.

They said the suspects are likely to intimidate their juniors and interfere with the integrity of the investigations.

But Arwa said the only crime the six suspects have committed is holding offices and having done their work, and "the application is not just illegal but also absurd".

He said the prosecution should have shared details with the court to connect the suspects logically and evidentially, to any crime under investigations.

"The only crime that these people could have committed is holding certain offices and that means even those being interviewed should also be in here [in court for custodial orders]," Arwa stated.

"The prosecution should demonstrate circumstances under which interests of justice could be served if the respondents are kept in custody."

Arwa said the state has not revealed which of the two vehicles bearing registration number KCN 340E bears the registration obtained fraudulently.

During the incarceration, the detectives will interview KRA, NTSA and Kenya Prison Services officers among others to establish how the double registration was given.

On Friday, three suspects linked to the Dusit attack were released for lack of evidence.

A total of 14 people had been arrested.