A scheme to stop Deputy President William Ruto from succeeding his boss is steadily taking shape and gaining momentum.

Phase One, according to people aware of it, was to remove the DP from making decisions on which development projects will be prioritised and funded by the government.

"There is no way we will allow Ruto to become President. Either he accepts to retire with his boss or we will force him to retire," pledged former Jubilee vice chair David Murathe yesterday.

Ruto's critics say he is corrupt, which he vigorously denies. They say he is already campaigning for himself, not the people of Kenya as he commissions projects. Central Kenya business leaders also have indicated they don't trust him to safeguard their interests. And Central wants one of their own to wield power. Further, Ruto is not descended from a Kenyan dynasty.

The second part of the plan will be implemented when the widely expected referendum will be held. The Building Bridges Team is expected to make wide-ranging recommendations on which constitutional changes Kenyans will be asked to decide.

People close to the President yesterday told the Star they will push for a ceremonial president, an executive prime minister and two deputies. But Ruto wants to be a powerful President.

The new positions would be filled after the 2022 General Election but the occupants will be decided before the polls.

In this plan, Ruto will not be the presidential candidate but will be offered one of the Deputy Prime Ministers position. Should he reject that, Baringo Senator Gideon Moi will take the DP's place.

"We believe anyone but Ruto should be President," former Starehe MP Maina Kamanda said.

The Music Copyright Society of Kenya has been given its licence to collect royalties on behalf of musicians after it met stringent conditions set by ...
News
3 years ago

But Kapsaret MP Oscar Sudi yesterday was quick yesterday to dismiss the plans, saying they are bound to fail.

Already Uhuru is spending a lot of time with Raila and consulting with him on many issues since the handshake on May 9 last year.

Kalonzo has also been brought in and Mudavadi is being encouraged to make inroads in Central Kenya.

A mass walkout from Jubilee by leaders from Mt Kenya region is also part of the scheme. Some of the region’s politicians are already considering creating a new party, cobbling together a new alliance with other parties, or revamping an existing party in order to stop Ruto.

"Jubilee is firm under the leadership of President Uhuru Kenyatta and his deputy William Ruto. When the President tells us at an appropriate time, we shall start campaigns. The President has said he will be Ruto's chief campaigner," the Garissa Township MP said.

On Tuesday, Murathe, who is seen as the face of the anti-Ruto camp, attended a meeting convened by Wiper leader Kalonzo Musyoka at his Yatta farm where he continued with his anti-Ruto rhetoric.

In a not-so-veiled attack on Ruto, Murathe said, “I was surprised during the anti-corruption conference in Nairobi where the person who was being discussed over corruption was seated right there shamelessly.”

Murathe previously has said Ruto is unfit to be president because he is "corrupt" and when he stormed out of Jubilee in a huff, he claimed Central Kenya would create a new movement to stop Ruto.

Current and former legislators from the region have separately formed the Mt Kenya and Diaspora Leaders Forum and the Mt Kenya Parliamentary Group. 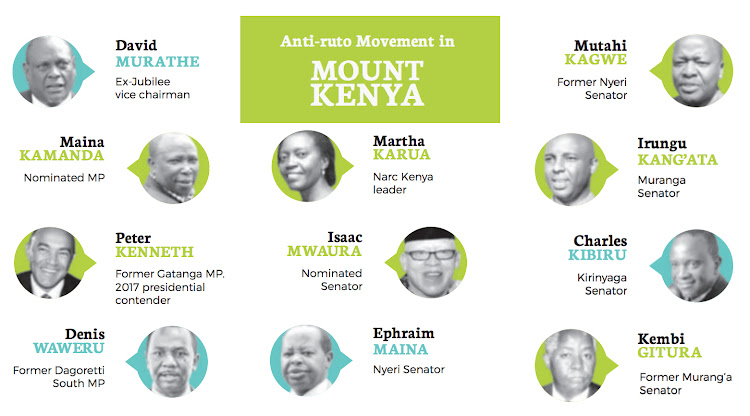 In a clear signal the plot is taking shape, a faction of Central Kenya leaders opposed to Ruto held a closed-door meeting at a Kiambu hotel on Tuesday.

Those cobbling together a political vehicle out of Jubilee are said to be behind the revival of President Mwai Kibaki’s Democratic Party.

The DP has been inactive since 2007 when it rallied behind Kibaki’s reelection. Kibaki ran under the Party of National Unity (PNU).

In a bid to inject fresh blood into the party, youthful former Transport PS Irungu Nyakera was recently tapped to be the party’s deputy leader as it positions itself for Uhuru's succession.

A rejuvenated and reorganised Democratic Party, seen as an alternative fallback for the anti-Ruto movement, could soon hit the road.

Yesterday, Nyakera distanced the Democratic Party from the plan.

“The notion of the party being a fallback plan for disgruntled Jubilee leaders is misplaced,” he told the Star on the phone.

The former PS said anyone engaged in DP activities is doing so as "a friend of the party".

“For us as DP, we are open to friends who need not necessarily be members," he said.

The party has a new team of leaders and has rejigged its youth wing, known as the Young Democrats.

They are trying to popularise DP ideals, as crafted by its founder, Kibaki, in sittings countrywide.

The former president founded the Democratic Party with an agenda of economic sustenance and empowerment of Kenyans.

"The party’s leaders, most of them aging, sought to revive the entity to save it from risk of collapse after their death," Nyakera said.

The DP, though warning against early political campaigns, says it will present a presidential candidate in the next election.

DP chairman Esau Kioni said, “The party has a large room for those who are or will be orphaned in their current parties."

He said the party has not raided Nasa or Jubilee in the hunt for members.

Kioni said the party has registered members in at least 25 counties. "We are in Western, Rift Valley, Nyanza, Coast, Central, and Northeastern," he said.

“We are not into politics at the moment as elections are still far. But when that time comes, we will certainly be ready to work with parties that share in our ideals,” Kioni said.

In 2017, the DP did not fold into Jubilee but endorsed Uhuru’s reelection.

Ahead of the 2013 vote, Uhuru and Ruto rode on a joint ticket. The agreement then was that Ruto would automatically succeed Uhuru at the end of his term.

But the situation has changed in the face of moves to trim the DP's powers. Matiangi's appointment demonstrated that all is not well between Uhuru and Ruto.

Belgut MP Nelson Koech said Ruto will triumph despite the roadblocks his enemies are trying to erect. He said the DP has countrywide support and dismisses Murathe as cipher.

"The DP has diligently worked cordially with the President in serving Kenyans. But day and night his enemies are strategising in vain to wage war between him and the President. God willing, they will be here to witness Ruto lead this country," he said.

More on this:DP Ruto will never be President of Kenya - Atwoli