Nurses in 23 counties to strike over unresolved pay hike deal 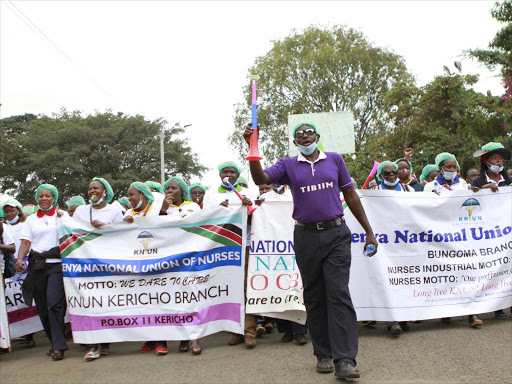 Nurses demonstrate during the nationwide strike over their CBA, July 24, 2017. /MONICAH MWANGI

The Kenya National Union of Nurses has called a strike in 23 counties starting Monday next week.

The Union's secretary general Seth Panyako on Wednesday said only three countries will not be affected.

The other 21 counties have shown interest in fulfilling the collective bargaining agreement signed on November 2 2017.

"Only three county governments have fully complied and implemented the return to work formula. The three counties are Machakos, Mombasa and Migori," Panyako said while addressing journalists.

"Twenty counties promised to effect the pay either at the end of this month or end of February hence will receive their strike notices from next week," he said.

Panyako said communication from the counties indicates they have factored money into the budget but blames Salary and Remuneration Commission for failing to include the money to their payroll system.

Nurses say they have been taken into circles by SRC.

The health officers were to go on strike December last year but halted it to pave way for negotiation which they say is yet to bear fruits.

The nurses are demanding nursing services allowance to be implemented in three phases.