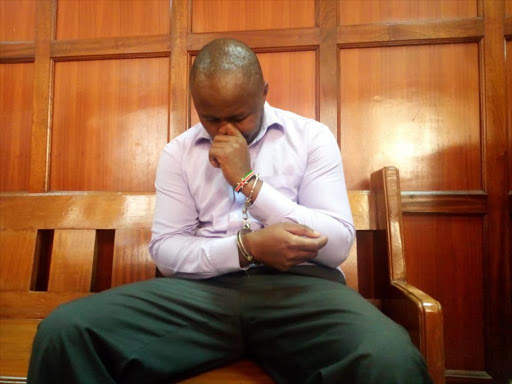 Augustine Musembi at the Milimani court on Wednesday, January 30, 2019, where he was arraigned over the registration of a vehicle used in the Dusit terror attack. /COLLINS KWEYU

The Anti Terrorism Police Unit on Wednesday obtained orders to detain an NTSA official suspected to have aided registration of the vehicle used by the Dusit attack terrorists.

The car, registration number KCN 340E - a Toyota Ractis, was used by the four men who carried out the January 15 attack that claimed 21 lives.

later established that there was a different car with similar registration in Kitengela, Kajiado county.

Githaiga said it is apparent that one of these number plates is either fake or was issued fraudulently.

Musembi is suspected to have aided in the issuance of the car registration.

The number plates are manufactured by the Kenya Prisons Service.

State counsel Eddie Kaddebe who filed Githaiga's application, said investigators want to find out how the similar registration was issued.

He said Githaiga needs time to visit NTSA offices and investigate the procurement process and recover all the documents related to the production of the duplicate number plates.

"The applicant needs time to consult the KRA and NTSA to ascertain the true owner of the motor vehicle," Kaddebe stated.

Investigators will also interview staff at the transport and revenue authorities

as well as the Kenya Prisons Service to collect, collate and consider the requisite documentation during the probe.

He said should the DPP make a decision to charge Musembi, he will be facing charges of the provision of property or services for the commission of terrorist acts against the prevention of terrorism laws.

The offence attracts a maximum of a 20-year jail term.

Mûsembi was arrested on Wednesday and his phone taken to the ATPU's ICT lab for analysis.

The ATPU officers sealed off the NTSA offices earlier on Wednesday as they began their investigations.