Ruto dilemma over his supporters’ fury 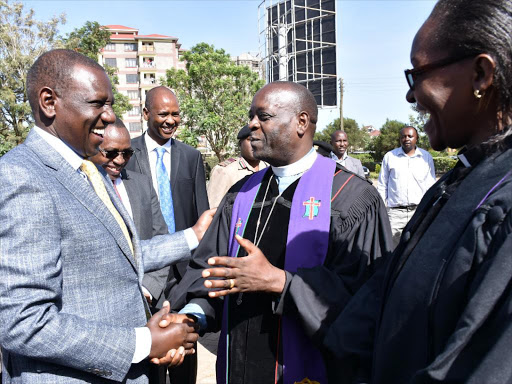 Ruto’s supporters, including elected leaders, are simmering with rage over what they believe is a move by people close to State House to isolate the DP and cut him down to size.

The Star has established that some of Ruto’s allies have been pushing him to call the bluff of President Uhuru Kenyatta’s men he believes are sabotaging his 2022 presidential bid.

But the DP is said to believe this strategy would fuel the inferno gutting Jubilee and prematurely end the political marriage with Uhuru, three and half years to the polls.

Ruto thus has remained tight-lipped about his political tribulations, putting on a brave face and dismissing any claims that he has been sidelined as street talk.

In his characteristic style, the DP yesterday played down the succession intrigues that hit fever pitch last week, following the elevation of Interior CS Fred Matiang'i.

Uhuru made Matiang'i chairman of a powerful Cabinet subcommittee in charge of all development projects. Pundits say that makes him a 'super minister'.

“We are past the elections period,” Ruto said yesterday during a church service in Ngong', Kajiado county.

“This is not the time to talk about the politics of succession but the time to serve Kenyans. We have a country that we must ensure goes places," he said.

The DP said Kenyans need not to be anxious about political events and urged leaders to shun politics of ethnicity. They should adopt politics founded on development, he added.

“My advice to him is to quit government and begin hitting at Uhuru as a betrayer. Tell the Kikuyus that this is not how to live with other Kenyans. He can also look for other people who have been betrayed before, like Kalonzo, and work with them,” he suggests.

Ruto has cut down on his political activities and countrywide travels since the President reportedly read him the riot act on January 14, a day before the attack on the Dusit Hotel.

Cabinet Secretaries have also been asked to stop attending official functions at DP Ruto’s Karen home; instead, all development meetings will be held at Harambee House.

Interviews with various politicians from the Rift Valley captured growing discontent fuelled by a feeling that the DP is being isolated before he is finally elbowed out.

“The Kalenjin nation is unhappy. Their hearts are burning. We aren't just speaking about it because we feel we will whip up emotions,” a former Cabinet minister told the Star in confidence.

The former bureaucrat was categorical that it would be really difficult for Ruto to convince his supporters that the Jubilee marriage is still working and the bride would “deliver a bouncing baby in 2022.”

“I wish you could have moved across the Rift Valley and listened to the voices of our people, it is really bad and their hearts are boiling,” the former ODM politician said.

“Currently you can’t even go for a church service within the Rift Valley and escape without answering some of those concerns. How do you even start really? It is painful," the Ruto ally said.

Some of the DP's hitherto most vocal allies have ducked and maintained a studious silence, as part of the wider Ruto game plan.

Yesterday Duale, Murkomen and Washiali — the DP's most trusted and loyal lieutenants — declined to comment on their boss's current political turmoil.

Yesterday, political analyst Mark Bichachi said the DP is walking a tightrope in diffusing the negative perception among his allies and supporters who hold the view that he is being pushed out of government.

Bichachi said while in reality and according to the Constitution, Ruto is Deputy President with sweeping powers, practically there is a perception that he has lost considerable ground in government.

“The biggest issue is perception. He [Ruto] is perceived to believe that in every passing day there is something that happens that puts him aside,” Bichachi said.

He added, “He needs to do a lot to bring himself to the centre of Jubilee politics. He needs to tone down the rhetoric of his allies who keep shouting”

The analyst warned that the more Ruto's allies sustain their attacks, the more there is a feeling of a rift in government.

“He must do more to tame his allies and show that he is working with President Uhuru and that he is part and parcel of the decisions the President is making,” the analyst said.

ODM Treasurer and former Kitutu Masaba MP Timothy Bosire said the DP had panicked because of a clash between his personal interests and the national interest.

He said the March 9 handshake approach to the country's political dispensation was still being resisted by the DP and his allies whom he said were pursuing personal interests.

“He might be compelled to look at things differently with the new political approach that emphasises management and national interested,” the ex-MP said.

Bosire said the DP fears a looming political dispensation being worked on by the Building Bridges initiative — like expanding the Executive in size, reducing the powers of the President and introducing a Prime Minister.

“This approach will bring a fundamental shift in management. This approach may not necessary please many, especially when their personal interests are not being catered for,” he added.

"We are fully in support of the ongoing development projects in the country. We will not dare to be out of the government now or in the future,” Sunkuyia said.

However, although his confidants have remained tight-lipped about the growing disquiet, the Star independently established that the DP's expansive Rift Valley constituency is seething with rage.

Troubling the DP further was Uhuru's decision last week to appoint Interior CS Fred Matiang'i as the focal point of Jubilee's development agenda. Ruto himself had been going around the country campaigning and commissioning projects.

The appointment of the fierce technocrat to the powerful position of chairman of the National Development Implementation and Communication committee of the Cabinet has been interpreted as a strategy to frustrate Ruto.

While the DP tried to down play the elevation of Matiang'i, his confidants have been rattled by the President's move against backdrop of concerns that the CS was enhanced to reduce Ruto's influence.

“Government officers at all levels should align their operations to the order issued by the President setting up committees at the county, regional and national levels,” Ruto said in a tweet last week, his first comment on the executive order elevating Matiang'i.