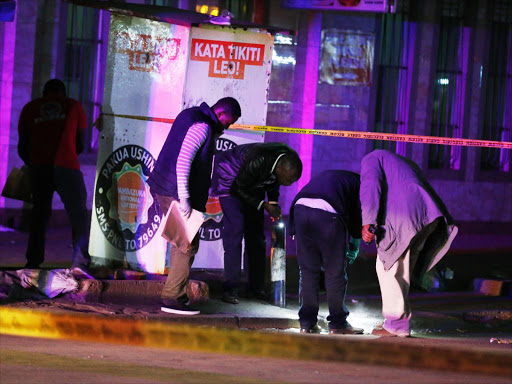 Police officers at the scene of an explosion outside Smothers Restaurant along Tom Mboya street after the explosion, January 26, 2019. /JACK OWUOR

Two people were injured on Saturday night after a suspected IED went off outside Smothers Restaurant at the Tom Mboya - Latema Road intersection in Nairobi.

Nairobi regional police commander Philip Ndolo said a man of Somali descent had hired a trolley pusher to move a carton box from Latema road to Kenya Cinema when the luggage went off.

The device inside the box is suspected to have been an improvised explosive device, he said. He gave the name of the trolley pusher as Joseph Okinyi.

"As they were reaching the junction between Latema and Tom Mboya, the gentleman pretended to have forgotten his ID and therefore requested Okinyi to stop there so that he can dash back to get his ID," Ndolo said.

He said it was when Okinyi was still standing there that the box exploded.

He spoke at the scene shortly after the incident happened.

The explosion comes in the wake of a terror attack at the upmarket DusitD2 complex on 14 Riverside Drive that claimed 21 lives on January 15.

On Friday, the US Embassy in Nairobi issued an advisory for Kenyans to be extra vigilant in crowded places.

It advised people to stay alert in locations frequented by tourists and Westerners.

Ndolo appealed to Kenyans to study their surroundings at all times and know their neighbours.

He asked cart pushers to be certain about the contents of luggages before agreeing to move them.

"I would also want to appeal to all the members of the public to give us information at hand whenever they see something that is suspicious to enable us act and save the situation," he said.