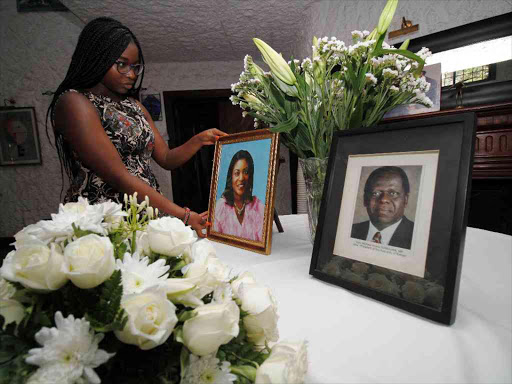 A legal battle over the property of ex-Vice President Michael Kijana Wamalwa is tearing his family apart and has forced his youngest daughter to drop out of school for lack of support.

The property dispute pitting Wamalwa’s six children, four from different mothers, has delayed processing of pension benefits of the flamboyant politician 15 years after his death.

At the centre of the row is the Karen home that was partly paid for by the Kenyan government after Wamalwa’s death.

By the time he died, Wamalwa had paid Sh19.5 million and the balance of Sh31.9 million was cleared by the government.

In court papers obtained exclusively by the Star, Wamalwa’s late widow Yvonne Nambia Wamalwa argued that the Karen home was not part of his estate.

Before her death on January 25 last year, Yvonne wrote a will bequeathing the house to her daughter Michelle Nafuna Wamalwa and son Derek Mboya.

Justice Aggrey Muchelule barred Yvonne, her servants and agents from selling, leasing or in any other form alienating the parcels until the estate of the deceased is finally distributed.

Muthoni and her stepbrothers now want the Karen home sold and the proceeds shared equally among five beneficiaries.

The children are also battling for two apartments at Akila I Estate, along Mbagathi Road in Nairobi, 40 acres in Trans Nzoia and 3.8 acres in Milimani, Kitale.

There are also 3.34 acres on which Wamalwa’s residential home stands and a property only described as Agricultural Finance Corporation, also in Kitale.

But Muthoni claims Derek was not Wamalwa’s biological son and should not be a beneficiary of the estate.

She claims that Derek’s father is alive and is a man of means “from a reputable family of Tom Mboya”, and that his mother was only using him to increase her stakes in the estate.

“I have learnt that Derek’s father, one Mr Luki Mboya, is alive and he is a man of means,” she states.

Before her death Yvonne, who had a lavish wedding with Wamalwa in 2003, said the ex-VP had taken in Derek as his own son.

“Derek …was also a beneficiary and a dependent of the deceased [who] had during his lifetime taking him up as his own son, maintained him and paid for all bills and treated him as one of his children,” she stated.

In fresh court papers, Yvonne’s last-born daughter Michelle Nafuna Wamalwa, who was a minor until November 9 last year, says she has been out of school for the last one year.

She says her step siblings have never helped her and she depends solely solely on her brother Derek and her aunt Jacqueleen Nangami Nyangweso.

“The death of both my parents has rendered me an orphan…I have been out of school for almost one year since my late mother passed away, as I am yet to be provided my beneficial share in my late parents' estates,” she says in her affidavit.

Wamalwa died without a will. But on September 12, 2003, Yvonne applied and was granted letters of administration.

On January 24, 2005, the grant was rectified to include Muthoni as a co-administrator.

Muthoni has now opposed Derek being made her co-administrator following Yvonne’s death.

But Derek is now turning the heat on Muthoni, accusing her of exposing the estate to unnecessary loss and debt.

For instance, he claims Muthoni has leased eight acres in Kitale and another 40 acres in Saboti to her relatives.

He also claims that Muthoni in collusion with his stepbrothers sold 700 trees belonging to the Wamalwa estate at a gross under valuation.

According to the court documents, the trees were sold at Sh1,500 each and not Sh3,500, which Derek claims was the market value.

He also claims that Muthoni transferred the AFC land to her name and that of Jabali, William and Wamalwa Jnr without their knowledge.

It is on this parcel that former President Mwai Kibaki instructed that a mausoleum and library be put up in honour of his late former deputy.