US advises Kenyans to be vigilant over terror threats 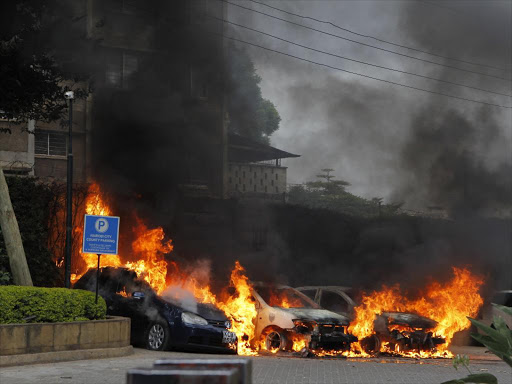 Vehicles burn at the entrance of DusitD2 attack following a terror attack on January 15, 2019. /MONICAH MWANGI

The US Embassy on Friday issued a security

alert, reminding the public to stay vigilant in public spaces such as shopping malls, hotels, and places of worship.

The warning comes after the Dusit terror attack last Tuesday which claimed 21 lives.

Through their Twitter account on Friday, the embassy asked the public to be aware of their surroundings and stay alert

in locations frequented by tourists and Westerners.

It also advised foreigners to have their travel documents up to date and easily accessible.

The public was also advised to review their personal security plans.

The terror group al Shabaab, which claimed responsibility, said the attack was in retaliation of US President Donald Trump's decision to declare Jerusalem the capital city of Israel.

Trump announced the US' recognition of Jerusalem as Israel's capital on December 6, 2017. He ordered the relocation of the US Embassy from Tel Aviv to Jerusalem.

US ambassador to Kenya Robert Godec on Thursday dispelled speculations on social media that his government had prior intelligence on the DusitD2 terrorist attacks.

Among those killed was an American national, Jason Spindler, an employee of I-DEV International.