The journey to police reforms 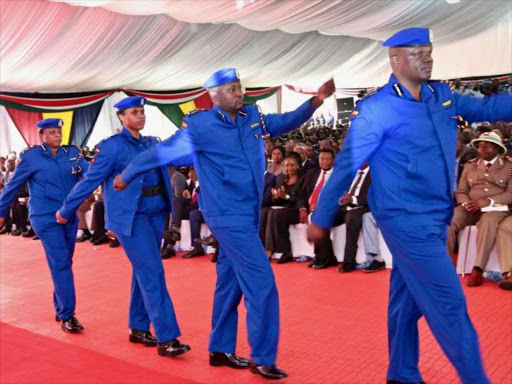 Police march in their new uniform during the launch at the Kenya School of Government in Nairobi on 13 September, 2018. COURTESY

Other include improving the welfare of servicemen and women and salary increment.

Summary of the reforms

The initiative is being handled by the Uniform Committee comprising a team of security officials who met to decide the new color to be adopted by the service.

The team settled on the deep blue color for the General Duty Police.

“The Uniform Committee arrived at the new outfit after comparing uniforms won by other regional and local security agencies. It was not a unilateral decision. Much was considered and it will take at least two years to change,” said a senior officer who sits on the committee.

Under the GDP order, however, the colors have been dropped and the servicemen will be unified by the deep blue suit.

While unveiling the uniform in September last year, President Uhuru Kenyatta said the new outfits will enhance the visibility of the officers.

He clarified that material for the new uniforms must be sourced locally and the sewing done by the National Youth Service.

Kenyan police are poorly paid and the majority live under squalid conditions in old police lines that have never been renovated since the 1970s.

This has demoralized many and made others susceptible to corruption and other crimes.

Extortion and bribery are synonymous with Kenya police.

The force has over the past few years been ranked as the most corrupt state agency by opinion polls.

In July 2010, the then Interior CS Prof. George Saitoti announced a 28 per cent salary increment for junior officers and a 25 per cent raise for senior officers.

This brought the maximum pay for junior officers and officers of the rank of Constable to Sh21, 000 plus allowances.

Their salary review will depend on the constitution of the incoming National Police Service Commission which is mandated to determine officers’ salaries.

The tenure of the previous NPS commission chaired chairman Johston Kavuludi ended in October 2018 and a new one is yet to be formed.

Head of Corporate Affairs at NPS Patrick Odongo says the reforms will be exercise in futility without looking at the salary gaps.

“We know we cannot be talking of reforms without serious consideration of welfare. If we can put the officers under good house allowance, commuter allowance, give them a good health cover and insure them then we shall be moving on the right track on the reforms,” he said.

The service has already rolled out a new command structure and named new regional police commanders and some 46 county commanders.

While naming the commanders, Boinnet said the current regional police commanders from Kenya Police and those from Administration police have been recalled and redeployed within the National Police Service.

Matiangi said the system will bear accurate, real-time data on each officer, including their recruitment, training, career progress, deployment, family records, and other related information.

He said the system will further enhance the ability of the National Police Service to share local information and intelligence with relevant security agencies nationally and internationally.

Reduction of number of recruits and introduction of Police service week

The service towards the end of last year announced a plan to cut the number of annual recruits by half.

Inspector General of Police Joseph Boinnet said the service will this year reduce the number from 10,000 recruits to 5,000.

This, he said, is in line with the police reforms under the new recruits training curriculum.

"We are piloting for the second phase which will is targeting to focus on training of corporals, sergeants and senior sergeants under the same programme next year," he said.

We are currently working on a module that will see all the examinations standardised across all the institutions. This means all the uniformed men and women will sit for the same exam irrespective of the service they serve in," he said.

The IG said this will play a key role in incorporating management of skills within the service.

During the official launch of the Annual National Police Service week, Boinett said the event aims to do away with the fear members of the public have towards the service.

Boinnet said the service will not only use the event to showcase what it does, but also interact with the public and listen to feedback as it aims to ensure a police force that is people-centred.

His sentiments were echoed by Interior CS Fred Matiang'i who said the public should find time to interact with the police to understand how officers work.

Post a comment
WATCH: The latest videos from the Star
by By PATRICK VIDIJA @vidijapatrick
News
25 January 2019 - 06:00
Read The E-Paper