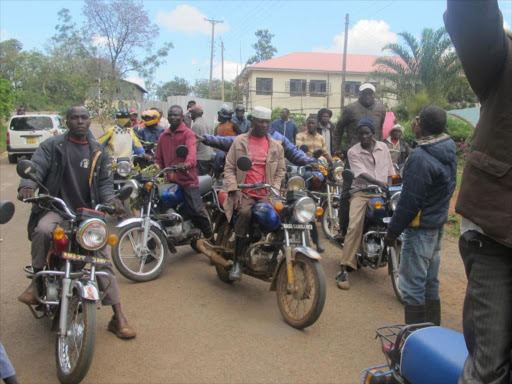 Police were on Thursday forced to fire into the air to separate fighting boda boda and taxi operators in Migori town.

The tension between the two groups has been simmering in the last three months after the county government's move to decongest the town which has seen parking lots re-organised.

In a bid to increase revenue collection and boost access of town, taxi operators and boda boda riders were moved from the busy Kisii-Migori-Isebania highway to allow for expansion of the town's bus park.

In retaliation, boda boda riders across the town marshalled up their members and assaulted taxi riders forcing them to hide their cars.

“When the town was re-organised, there was no plan

Angry boda boda riders moved within Migori town looking for taxi drivers who assaulted their colleague in a cat and mouse chase that ended at a home in Nyabisawa village.

Nyabisawa chief Bernard Alila said the riders planned to invade the home of Mzee Okero, whose son is a taxi rider and wanted to burn down his homestead and granaries.

“We managed to call police officers who arrived at the homestead just when the riders were assaulting Okero's family members,” Alila said.

officers had to fire several gunshots and lob teargas canisters in the air to disperse the riders.

On Thursday and Friday morning, police and county government officers held meetings with officials from the two sides to restores peace in the town.

“Even though we are fined Sh 2,000 when accessing undesignated regions, it is taxi drivers and not county officials who assault us and collect the fines,” Albert Otieno, a leader of the boda boda riders said.

Alila said they have managed to talk with the two sides to “help them solve their problems through dialogue instead of resorting to arson and assault attacks.”

Daudi Obado, the county Trade director said the allocation of stages involves several departments and already there are meetings scheduled to end the impasse.