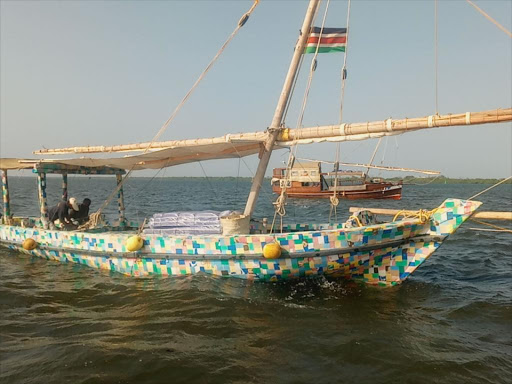 The plastic Flipflopi before it set sail to Zanzibar on Thursday, January 24, 2019. /CHETI PRAXIDES

The Flipflopi, a traditional dhow made entirely of plastic trash collected from beaches, has set sail on its first maiden overseas voyage to Zanzibar, 500 kilometres away.

The 9-meter long dhow is the first of its kind having been built of 10 tonnes of plastic waste by hand.

The objective of the 16-member crew aboard the dhow is to create awareness about marine plastic pollution and encourage recycling of the same.

The dhow was launched in Lamu on September 15 last year during celebrations to mark World Clean-up Day.

The FlipFlopi will sail south along the coasts of Kenya stopping in Watamu, Kilifi, Mombasa and Diani, before crossing into northern Tanzania with planned stops on Pemba Island, and onwards into Stone Town, Zanzibar.

The voyage will take between 12 and 14 days.

The dhow is expected to arrive in Zanzibar on February 7.

The team will be visiting schools, communities and government officials along the way sharing solutions and changing mindsets.

The sail will be approximately 50 to 80 kilometres a day.

Speaking in Lamu town shortly before they set sail on Thursday, the Flipflopi’s inventor, Ali Skanda, said they purpose to demonstrate that plastics can be used more than once.

He said the crew will also organise beach clean-ups with local partners and also visit a number of marine conservation and plastic recycling initiatives along the way.

Skanda said they will also educate the public on the dangers of dumping plastic waste in the ocean.

Upon arrival in Zanzibar, the Flipflopi will join Conservation Music at the Busara Music Festival.

The festival aims at championing the war on marine plastic pollution through music and culture.