Get used to bloggers and move on, Uhuru tells Maraga 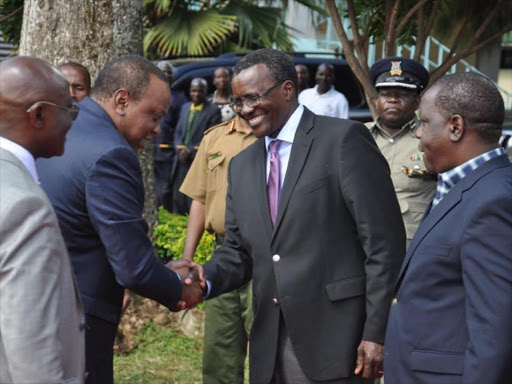 Maraga had earlier on Friday complained that bloggers were posting photo-shopped pictures of him massaging some corruption suspects.

showed on social media naked...we are not going to win the war on corruption with such gimmicks," Maraga said.

But Uhuru speaking at the Anti-Corruption Conference at Bomas of Kenya on Friday, hit back at the CJ telling

him that he has a problem and must deal with it.

"Bwana CJ we tried passing some law to help us restrain these people (bloggers) but the court told us it was unconstitutional. Like the rest of us, get used to it,"

Uhuru said everybody should clean their own houses in regards

to the corruption cases before they are trolled on social media.

"JSC must decide whether to clean up the house for themselves or for them.

I went back to the drawing

[tighten your belt CJ and you will see changes]," Uhuru said.

[I think you have a problem my friend... and you will have to deal with them..]."

The President appealed to bloggers to highlight issues affecting Kenyans but refrain from insults.

"Please stop the insults and instead if you have something to say, say it in a proper manner," he added.

suspended enforcement of the new Cybercrime

Law which would have seen social media users jailed for 20 years for some of their posts.

law curtailed their freedom of expression and aimed at muzzling its members.

The temporary order seen as a win for freedom of expression suspended 25 sections of the law which were meant to come to force on May 30 last year.