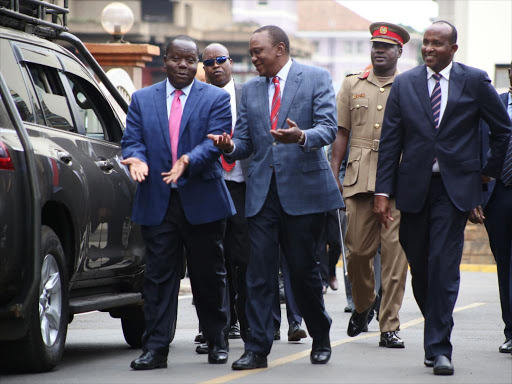 Interior CS Fred Matiang’i’s meteoric rise in Kenya’s political scene started in 2013 when President Uhuru Kenyatta tapped him from the academia to head the ICT ministry.

His latest appointment as chairman of the National Development Implementation and Communication Cabinet Committee has added more feathers to his cap.

Deputised by Treasury CS Henry Rotich, Matiang’i will also be in charge of the National Transport and Safety Authority, which was previously under the Transport ministry.

The development affirms perceptions among most Kenyans that the CS is the government’s ‘Mr Fix It’.

Matiang’i turns is the minister who has the President’s ear. He is the one who fills vacancies left by CSs heading core ministries.

It started with the Lands ministry when Uhuru in 2015 named him acting Cabinet secretary replacing Charity Ngilu, who had been sacked over alleged graft.

While there, he was credited with championing for Kihiu Mwiri settlers to be issued title deeds.

He also ended the power tussle pitting Lands ministry and the National Land Commission and left the docket after Jacob Kaimenyi, the current ambassador to Belgium, took over as Lands boss.

The CS became the focus of attention as the general elections were barely a week away. At that time the Interior ministry had a key role to play in the polls.

Matiang’i’s current role is likely to put him at loggerheads with Deputy President William Ruto. The new structure requires that he reports to the President directly.

The new responsibility has sparked a national conversation on whether Uhuru is out to cripple Ruto’s powers ahead of the 2022 General Election.

The DP, in line with the Jubilee agreement ahead of the 2017 vote, was to be the party’s presidential candidate. This is yet to be clear amid undertones that Jubilee is headed for collapse. A number of politicians, largely from Matiang’i’s Kisii homeland, have suggested that the Interior minister seeks a post in the presidency during the next election.

The no-nonsense CS shot into the limelight in 2015, when he insisted that media owners abide by the government’s digital migration plan.

The state at that time compelled broadcasters to migrate their broadcasts from analogue to digital platforms.

Matiang’i, then Information and Communication Technology CS, led the digital migration campaign insisting the change was inevitable, earning him ‘enemies’.

However, digital migration has opened the media space creating more opportunities for players.

Before the digital migration row, the CS had fought with media owners over the Media Act, 2013, and the Kenya Information and Communication Act, 2013.The legislation introduced punitive measures against the media and was judged as curtailing media freedom.

In November 2015, Matiang’i was moved to the Education docket, ostensibly to save him from the ‘enemies’ he made while ICT minister.

While there, he is credited with radical reforms which were praised as having transformed the education sector.Among them was the order on delocalisation of principals and insistence that all school buses be painted yellow.

Matiang’i also introduced changes requiring universities to ensure that only those with PhD, and have published in at least two journals, are allowed to teach. He also streamlined the management of national examinations.

It was in his tenure that the tradition of releasing KCPE and KCSE exam results in December and March respectively, changed.

He also dismantled cartels that ran an examination cheating racket in the country. The move led to a drastic fall in the number of students scoring A grades in the KCSE exam.

Before his appointment to the government in 2013, Matiang’i was executive director of State University of New York – Kenya Chapter.

While there, he spearheaded the creation of Parliament’s media centre under the Kenya Parliamentary Strengthening Project.

He has also had a stint as an English lecturer at the University of Nairobi and at Egerton University.