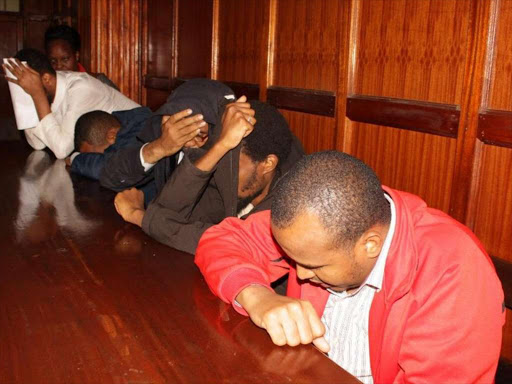 Suspects of the Dusit terror attack at a Milimani court on Wednesday, January 23. 2019. /FILE

The DPP plans to charge Diamond Trust Bank with aiding and abetting a terrorist attack by allowing a Dusit attack suspect to withdraw more Sh5 million in a day.

Hassan Nur made 13 withdrawals of Sh400,000 each within short intervals on January 4, with an additional withdrawal of Sh100,000 the same day.

The Anti-Terrorism Police Unit said the money was sent from South Africa and was wired to Somalia.

The Office of the DPP on Thursday said it is preparing charges against the bank and its officials.

It said the bank ought to have alerted authorities when such withdrawals were made.

Mbogo is being held alongside five other suspects including lawyer Abdinoor Ismael, journalist Ismael Ambitham of Horizon TV and the TV's marketing manager Ali Khamis.

Others are businessman Faisal Mohamed, who runs a parcel business. He is believed to have been contracted to deliver parcels to DusitD2 hotel and office complex by lead attacker Ali Gichunge.

All the suspects except Mbogo were in communication with the attackers involved in the Dusit attack on Tuesday last week and other contacts in Somalia.

In a replying affidavit, Mbogo said records likely to be sought by the prosecution have been stored by the bank and Safaricom Limited.

"I'm not in a position to interfere with investigations or evidence sought by the prosecution.

I'm an innocent bystander in this criminal inquiry. I'm a law abiding citizen with no previous criminal conviction," the affidavit states.

"The bank, being an agent of Safaricom, releases the float according to instructions issued by the firm."

Mbogo said based on an agreement between Safaricom and banks, Safaricom's agents can approach any bank, and upon confirmation by the firm, the bank releases the float to the agents.

She said none of the five suspects holds an account with DTB.