Uhuru to leave for Eritrea on Thursday - State House 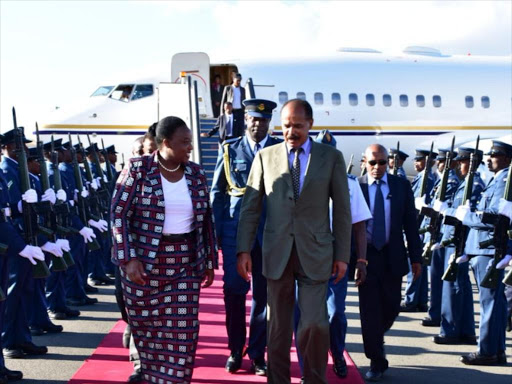 President Uhuru Kenyatta is expected to leave for Eritrea on Thursday.

The last visit by a Kenyan President to the country was in 1999.

Kenya is exploring possibilities of establishing an embassy there.

During his official visit to Kenya in 2018, Eritrean President Isaias

Afwerki held talks with Uhuru on regional peace and stability.

Afwerki’s visit to Kenya was the second during Uhuru’s presidency.

During his first State visit to Kenya in 2013, Afwerki attended the Golden Jubilee celebrations in Nairobi ending years of speculation over deteriorating relations between the two nations.

Diplomatic relations between Eritrea and Kenya faced difficulties in 2011.

The Kenyan Foreign Ministry accused the Eritrean government of supplying arms to the Al-Shabaab militant group.

The Eritrean authorities rejected the claims even as the Kenyan ministry threatened to review its bilateral relations with Asmara.