The rise and rise of 'super minister' Fred Matiang'i 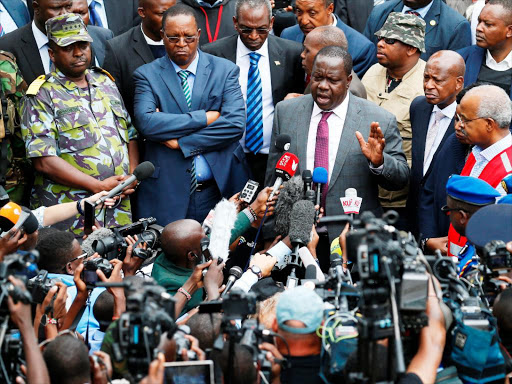 Internal Security CS Fred Matiang'i and other senior government officials address the press at the DusitD2 hotel in Riverside after the terrorists were neutralized ending the two day siege. January 16, 2019. Photo/Jack Owuor

Outspoken, a bulldozer and bold.

These, perhaps, are the words that best describe Interior CS Fred Matiang'i.

Matiang'i has been put at the heart of the Executive following President Uhuru Kenyatta's radical reorganisation of his administration and establishment of a four-tier hierarchy of authority.

The elevation of Matiang’i with supervisory roles across government is likely to whittle down Deputy President William Ruto’s influence.

His appointment has made Kenyans wonder what kind of powers the CS will hold with some Kenyans calling Matiang'i a super minister and a chief minister.

"‏Ruto is a tough guy but he must play smart. Why? Because Matiang’i is a tough guy too and if the DP slips up, the CS will have to checkmate him and boy will that be messy. If any man can stick it to you and look you squarely in the eye it is Fred Matiang'i. Drums please,"

Benji added "Matiangi’s portfolio means he must wake up at 3am daily and work even on Sundays. But with this responsibility money also comes like wind hitting a mountain top. We wish him the best, Super Minister!"

@SSulisuli said, "Matiangi will fight like a suicide bomber. He has absolutely nothing to lose. He is not politician and harbours no political ambition anyway."

He added "He will face Ruto as a man fighting corruption. He won't go round and round. The man is brave. Jamaa ni mwisho (this is the final guy). Ruto needs deliverance."

appoints Matiang’i to chair a new committee of all CSs...

What next for William Ruto?"

@Duke82_shatter said, "This executive order has made Fred Matiang'i the second most powerful Kenyan after President Uhuru Kenyatta. William Ruto being reduced to a mere spectator in the government."

Last year, a vicious fight between Deputy President William Ruto and Matiang'i exploded into the open.

The two have been engaged in serious fighting, which has been kept out of the public eye for months, and those aware of it told the Star that the battle was spiralling out of control.

But with all these speculations, Matiang'i has shown his capabilities in every ministry he has been left to take charge of.

Born in Borabu, the father of two has a diverse career spanning university lecturing, consulting for global organisations and working with Parliament among others.

Matiang’i is a Seventh Day Adventist who is said to be devoted to excellence and has made sure that he makes tremendous changes wherever he is posted by the President.

Matiang’i, who was once described by Knut as “a bull in a China shop”, has rattled many people’s nerves since he joined the Cabinet in 2013 with his firm and at times combative way of handling issues.

He was first appointed as the Minister in charge of ICT, where he oversaw the successful migration from analogue to digital.

Despite resistance from a group of industry players, Matiang’i stood his ground, making Kenya one of Africa’s first nations to migrate to the digital era.

After his role at the ICT, he took over the at the Ministry of Education in mid-2015 making drastic changes to the entire system

in what shook the sector.

took bold and timely steps to reform the education sector, the core of this was changes in the management of exams.

the Kenya National Examinations Council's board

Matiang'i's presence at the ministry has been praised by many.

Kenyans pleaded with Uhuru not to remove him from that docket but their pleas were not heard.

Matiang’i made radical changes in the education sector.

He earned the sobriquet “the Magufuli of Kenya” because of his impromptu visits to public schools.

With his attitude and his stun nature, Matiang'i took over at the Interior ministry after the demise of Joseph Nkaissery.

The President appointed him after seeing the changes he made at the Education sector.

He was seen as a man who would bring change to the docket with his 'no-nonsense' attitude.

And to many, the CS has not disappointed since he took over the role in 2017.

Sources within State House told the Star that the Council settled on Matiang’i due to his “firmness and commitment to a course”.

Matiang'i, while occupying one of the highest dockets a public civil servant can hold, has not been short of conflicts with the opposition.

During the 2017 General Election, Matiangi took a hard stance against the opposition protests aimed at the IEBC.

His ministry, which the national police falls under, would clash with the opposition violently during their demonstrations.

After the 'swearing-in' of ODM leader

officers from the Flying Squad picked up some individuals aligned to the opposition and some media personalities for questioning regarding their association with the swearing-in of Raila.