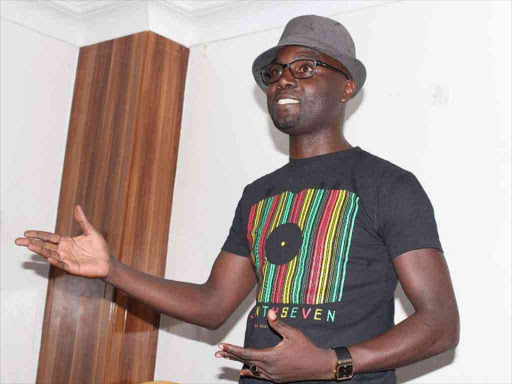 Harrison Mumia speaks at a Nairobi hotel on Saturday, September 25, 2018, during a meeting of atheists. PHOTO/COLLINS KWEYU

The Atheists Society of Kenya president Harrison Mumia has been sacked by the Central Bank of Kenya over gross misconduct.

CBK accused the outspoken Mumia of insubordination, disobedience and violating the bank's code of conduct that requires its employees to remain neutral on political affairs.

In a letter signed by the bank's acting human resource manager Terry Ng'ang'a, the bank cites a number of tweets that Mumia sent for its action.

The HR manager termed the tweets as offensive to the bank's rules and the law.

Last year on February 16, Mumia tweeted on the arrest of Nandi Hills MP Alfred Keter who

"I thought MP Alfred Keter was in government. I thought ako ndaani ndaani. Mbona anashikwa na his government tena? [I thought he was an insider, why is then being arrested by his government?] As a Jubilee MP surely!!! Unless being in government is a myth! For those who voted for Jubilee, mko ndaani ya [you are in] government in what sense?" the tweet read.

The bank said the tweet was political and Keter was subject of an investigation by agencies including CBK, his employer.

CBK said this qualified as insubordination.

According to the bank, another of Mumia's tweet on February 14 further compounded his expression of political preference.

The tweet read, "Can Jubilee NEC make Uhuru resign as ANC did to Zuma? Does Jubilee have an NEC? If it happened, that would be a relief for Kenyans. Right now any change from Uhuru is better than Uhuru any!"

The HR manager indicated in the letter that they had written to Mumia in May 2017 over his outspoken political opinion and he (Mumia) pleaded for understanding.

The bank again warned him on July 24 last year, though Mumia persisted to post his political opinions on Twitter.

Mumia was later suspended at half pay and told not to report for duty pending his response.

The bank's Discipline and Grievance Committee would later terminate his employment on May 11 last year.

Mumia appealed the decision to axe him, but through a January 11 letter, the bank decided to uphold the committee's decision.

However, the chief atheist took to Twitter on Tuesday evening protesting his innocence.

"I have SOLID EVIDENCE that my account was hacked. I presented my evidence before the Disciplinary Committee headed by CBK Deputy Governor, Sheila MBIJIWE. Still, I was fired. They never bothered to look at my evidence," he tweeted.