'Hungry Leopards' land In Dar ahead of SportPesa Cup Hunt 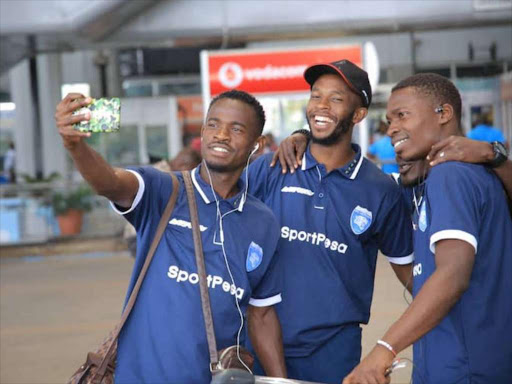 Trophy-hungry AFC Leopards SC became the first team from Kenya to land in Tanzania on Saturday morning, ready to hunt for a first SportPesa Cup crown at the third edition of the tournament in Dar-es-Salaam.

The 2017 losing finalists who crashed out in the quarters last year, descended into the Tanzanian commercial capital ready for another tilt of the biggest prize at the eight-team invitational regional showdown that kicks off on Tuesday, January 22, at the National Main Stadium.

Led by head coach Marko Vesiljevik, the Kenyan giants were in high spirits and gleaming confidence ahead of their titanic quarterfinal against home titans Simba SC on Wednesday.

"We're coming off an important league win and we still have a couple of days to train in Tanzania. I'm confident we will put on a great show," Vesiljevik told SportPesa News.

The SportPesa Premier League side are up against the 'Wekundu wa Msimbazi' who fell short of glory at the final hurdle to two-time winners Gor Mahia FC who outclassed them 2-0 in Nakuru last year.

Simba will be seeking to avenge their 4-5 defeat on penalties to Leopards when the two sides met at the neighbouring Uhuru Stadium in the inaugural 2017 SP Cup.

As fate would have it, Leopards paid the penalty a year later and were knocked out on spot-kicks by another Tanzanian side, Singida United FC at the Afraha Stadium.

"Last time it was painful to be knocked out on penalties but that's how football is. We learned from our mistakes and we are ready to do better if it gets to that," captain Robinson Kamura said.

"We are confident and with the talent in the squad, as long as we play as a unit then it won't have to get to penalties."

Kamura was handed the armband at the beginning of the season following the departure of Duncan Otieno, who left to seek greener pastures in Zambia.

Leopards are seventh on the SPL table with 10 points as they continue their quest to win a first domestic league title in 21 years.

"All our focus is now on the SportPesa Cup. We have seen what our rivals Gor have achieved in the tournament and we are ready to show that we can do it too," Leopards winger Eugene Mukangula said.

"We know that it's going to be a tough tournament and we are aware of the threat all the teams pose, though that will only push us to do better.

Our fans and even the team needs a good performance and that is what we are ready to give," left back Moses Mburu added.

Leopards traveled without dependable midfielder Victor Majid who sustained a knee injury while on league duty in the only blow to their line up.

"Every team has seen the fruits of the tournament when we all watched Gor play Everton both in Tanzania and at Goodison Park.

This is something which is great for African football and we are ready to do all it takes to make sure that it's our club that gets to play against English opposition on home soil," captain Kamura stressed.

If he succeeds in leading his side to SportPesa Cup glory, it will be the second time that he plays against an English club having been part of a SportPesa All-Star team from the local league to travel to the KCOM Stadium for an exhibition match against Hull City FC in 2017.

Leopards will rest for the most part of the day until a light session in the evening before beginning a normal training routine on Sunday.