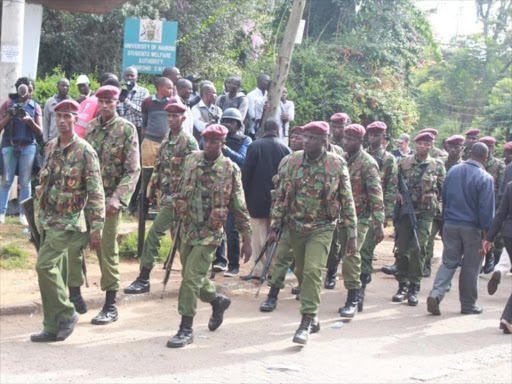 Security officers make their way to the site of the Dusit terror attack on Tuesday, January 15, 2019. /EZEKIEL AMING'A

As security forces continue to receive praise for their quick response during the Dusit terror attack, a family in Kimala, Taita Taveta, is mourning the loss of their son.

Japheth Ndunguja, 26, a GSU officer was

the only security officer killed in Tuesday's attack. He

He was shot early Wednesday morning, moments before the hotel was declared safe and all the terrorists neutralised.

His sister, Hellen Jumapili, said the two had communicated on Tuesday evening before he was deployed to back up the security operation at the hotel.

She invited him to her home for a visit and he promised to go on Wednesday morning after his shift was over.

“He told me he had a feeling he might be deployed to help at the hotel that night,” a tearful Jumapili said.

That turned out to be their last conversation.

On Wednesday morning, she called her brother but his phone did not go through.

Jumapili concluded he had switched it off to avoid disturbance while he rested.

Her worried parents called and asked her to find out if her brother was safe.

It was then that she

started a frantic search for her brother.

Jumapili called his friends but they said they didn’t know of his whereabouts.

Her parents would later call and break the devastating news of her brother’s death.

“They were informed of his death by the area chief and they called me,” she said.

she was close to her brother who was the last born in the family.

She said he was hardworking, committed to work and very loyal.

The officer’s body is at Kenyatta University mortuary awaiting postmortem.

Family members said he had already bought building materials and was planning to take his annual leave to go and build his house.

She said it was more tragic because the officer was a young man in his prime with a promising future.

“We are all devastated by his death but also very proud of what he did for his country. That is the hallmark of heroes,” Shaaban said.