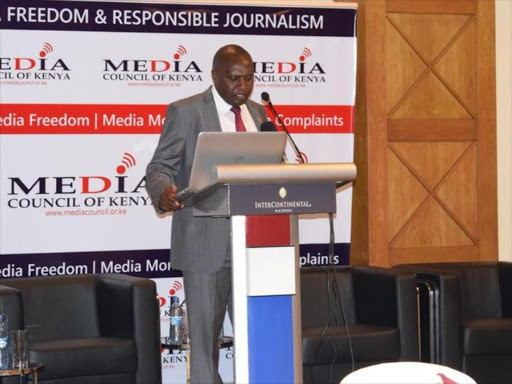 Media Council of Kenya CEO David Omwoyo during the State of the media report launch at the Intercontinental Hotel, Nairobi on May 3, 2018. /COURTESY

The Media Council has maintained that New York Times must adhere to Kenya’s Code of Conduct in journalism regardless of its editorial policy on publication of mutilated bodies.

CEO David Omwoyo said the paper’s insistence on showing the world “a clear picture” of horror attacks does not exempt it from the MCK Act that prohibits the publication of dead bodies.

“We strongly disagree with publishing mutilated bodies especially during an active incident while friends and relatives are scrambling to find their loved ones,” Omwoyo said in a statement.

“Relatives cannot learn of the death of their loved ones in the media in the name of showing the world.”

The CEO again demanded for an apology and the deletion of the gory photos.

Corbett wrote to the MCK boss on Thursday justifying the publication of bodies of victims of the attack at DusitD2 hotel complex on 14 Riverside, Nairobi.

The move drew online condemnation from Kenyans on Twitter.

Corbett said the publication was in line with NYT’s editorial policy that allows the showing of pictures that give “a real sense of the terrible situation”.

This, he explained, does not mean the paper does not respect the victims, their families, or anyone affected.

“In recent years, Times editors have made hard choices — and published similar painful photos — in situations ranging from a shooting in New York City to terror attacks in London and Manchester; to victims of the drug wars in the Philippines; to war and famine in Syria and Yemen; and many others,” Corbett said.

Omwoyo, however, told Corbett that journalists around the world are bound by the Code of Conduct for the Society for Professional Journalists that require them to balance between the public’s need for information and potential harm and discomfort.

“Pursuit of the news is not a license for arrogance and undue intrusiveness,” Omwoyo quoted the Code as saying.

He said the Code requires journalists to be compassionate to those affected by news events and treat other human beings with respect.

He further dismissed Corbett’s stand that Kimiko de Freytas-Tamura, the writer of the article containing the offensive images, or NYT journalists on the scene in Nairobi, were not responsible for the photos.

Omwoyo said all journalists accredited to work in Kenya are bound by the code against publication of mutilated bodies.