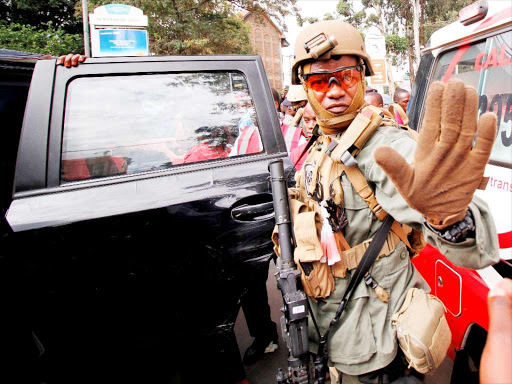 A security personnel control crowd at the DusitD2 hotel in Riverside after the terrorists were neutralized ending the two day siege. January 16, 2019. Photo/Jack Owuor

Lessons learnt from the failures of the Westgate Mall attack in 2013 informed the meticulous and well-coordinated response to Tuesday's terror raid at DusitD2 Hotel in Nairobi.

Sources told the Star yesterday that top security chiefs briefed President Uhuru Kenyatta and advised him on the need to conduct the operation from a central command.

“Without a change of strategy, we would not have rescued the 700 people that were evacuated from the block within the short time as we did,” the source who requested anonymity said.

The source said they agreed on how to conduct interior operations with less mass casualties.

At least 67 people were killed during the Westgate attack. Tuesday’s attack claimed 14 lives, authorities said. Many others were injured.

About 700 people were evacuated from the building by the end of the 20-hour siege. The Westgate siege lasted four days.

The Dusit complex has about 1,500 people including workers and hotel residents. At least 511 people were rescued by Tuesday evening. Another 174 were rescued during the night of the attack.

The Westgate attack was characterised by confusion and lack of a coordinated approach to end the siege.

The situation was worsened by the arrival of KDF troops who were called to reinforce rescue efforts.

KDF personnel deployed to combat the attackers were accused of looting shops, destroying ATM machines in search for cash, stealing phones and looting the supermarket.

“In the face of such a confusion, a lot often goes wrong as we saw with the Westgate attack,” the source said.

On Tuesday, a special command unit of the Administration Police, General Service Unit’s Recce Squad, Flying Squad and Kenya Police was formed for the rescue operation at the Dusit complex.

Many have praised the security officers, saying they displayed the best response strategy. All the units were under a singular command of GSU Commandant Douglas Kanja.

The response was coordinated by the National Security Advisory Committee from a strategic operation room.

“The response on the ground was swift, determined and involved various security agencies under a singular command,” Interior Cabinet Secretary Fred Matiang’i said.

Police also gave regular updates to the press on the progress of the operation, a situation said to have helped diffuse tension.

DCI boss George Kinoti was at the scene just minutes of the blast at the DusitD2 gate, a move that helped the DCI secure the crime scene before it could be contaminated.

Teams of police officers were quickly deployed. They rescued hundreds of those who were holed up.

The rescue operation went on throughout the night and by 3.45am, all who were holed up were let out.

After the rescue, police managed to eliminate the attackers who had engaged them in a fierce exchange of fire.

They were cornered before being shot dead. At about 9am yesterday, the first phase of the operation was closed.

Benjamin Mwenda, a security expert, told the Star that the central command and communication structure employed by the security agencies played a key role.

“It is for this reason that few people died compared to the case of Westgate. The operation took a short time unlike in 2013 when terrorists held the mall occupants hostage for days,” Mwenda said. He said police deserved praise for the efficiency witnessed during the operation.

“I was at Westgate and can attest that the measures taken then messed up the operation,” he said.

In his address the nation, Uhuru praised security officers for the “timely and well-coordinated rescue.”

“As the Commander-In-Chief, I want to commend the quick and effective response by our elite fighting teams for neutralising all the terrorists involved in the attack,” Uhuru said.

He said the operational priority of the security services was to safeguard civilians.

“They acted swiftly to contain the attackers and methodically evacuated those who were at risk,” he said.

“We have dealt with the threat decisively and shown our enemies and the world that we are ready to deal with any threat to our nation.”

The President also commended emergency response teams both on-site and at the various hospitals where the injured were rushed.

“We commend them and their reflection of our compassionate, resilient character as a people,” he said extending the same to the civilians who “looked after one another.”

“For every act of evil that led to injury yesterday, there were a dozen acts of compassion, overflowing patriotism and individual courage,” Uhuru said.

He said the government will continue strengthening the security and intelligence systems with a view to defeating terror threats.

Opposition chief Raila Odinga said, “We commend our security forces for the robust, rapid and coordinated response to the attack.”

DusitD2 has been closed and guests transferred to other hotels. The management thanked police for their quick response.

Post a comment
WATCH: The latest videos from the Star
by By MOSES ODHIAMBO @AliwaMoses
News
17 January 2019 - 00:30
Read The E-Paper