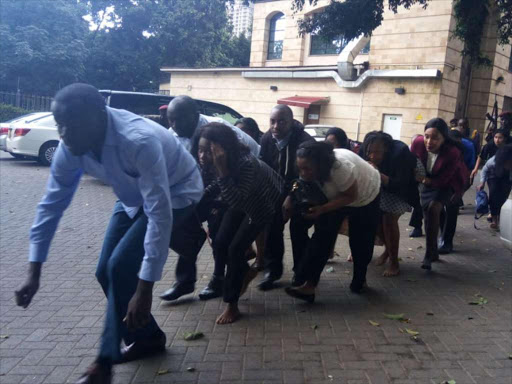 Some of the survivors being evacuated from the Dusit complex. PATRICK VIDIJA

One of those rushed to MP Shah Hospital died last evening, while two male casualties were receiving treatment.

A source at the hospital said most of the casualties were taken there by boda boda operators, who volunteered as first responders. The hospital’s emergency and trauma team was on standby to receive the casualties.

At the largest national referral facility KNH, people with burn injuries were brought in by ambulances and well-wishers in private cars.

Four casualties had been taken to the facility by press time. Three had hand burns.

The hospital’s personnel in the emergency and accident section were ready to receive casualties.

No family members of the victims had yet arrived but the crowd was gradually building up. No casualty with gunshot wounds was taken at the facility at the time.

At Avenue Hospital, two sisters were brought in and one was treated and discharged. There were 16 casualties with one woman with a gunshot in the abdomen

The sisters were having lunch at the Secret Gardens at the DusitD2 hotel complex when the explosion happened. They hid at the counter before they were rescued.

One of the women, who did not want to give her name, said the first explosion happened at the garden, where there were many casualties.

The four hospitals launched appeals for blood. Three people were confirmed dead by the time of going to press.

Al Shabaab claimed responsibility for the attack. “We are behind the attack in Nairobi. The operation is going on. We shall give details later,” Abdiasis Abu Musab, al Shabaab’s military operations spokesman, told Reuters.