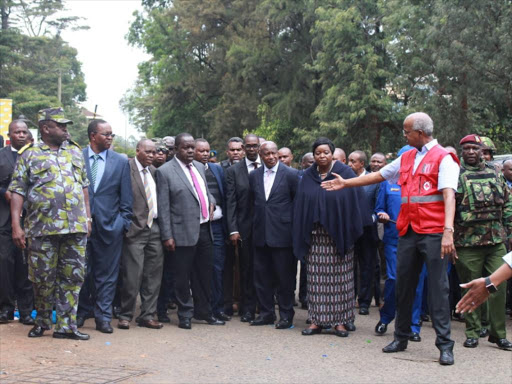 Leaders led by Interior CS Fred Matiang'i are directed to the site where the terror attack at Dusit Hotel occurred on Wednesday, January 16, 2019. /EZEKIEL AMINGA

Fifty people are still unaccounted for following the Dusit complex terror attack in 14 Riverside Drive on Tuesday, the Kenya

Abbas Gullet on Wednesday said a total of

94 cases of missing persons were reported but

been closed positively as at 1500hrs.

"Psychological support is also underway due to the trauma experienced by those affected both directly and indirectly. This is a service that is also being offered via telephone (on call) for those unable to access the counsellors stationed at the Chiromo campus and Chiromo mortuary," he

Gullet said the Society and other humanitarian actors will continue to work with the government in order to attend to families affected by the attack.

So far, a total of 180 individuals have so far received professional counselling.

For both tracing and

services, members of the public may contact the KRCS

National Assembly Majority Leader Aden Duale has said Parliament will review the country's security sector when it resumes on February 4.

will relook the whole legislation in the security sector, and work with the government and security agencies to improve our legal security systems.

All these he said will be aimed to make sure the country is safe and secure.

Speaking in Garissa on Wednesday, Duale lauded the security forces for containing the situation in the shortest time possible and bringing the perpetrators to justice.

"This is a clear manifestation of the investment we have made as a country in terms of intelligence gathering and equipping our security men and women to combat global terrorism challenges," he said.

"I am a classic example of a victim of terror in 2015 in the Garissa University attack and that's why our men in uniform have paid the ultimate price in Kenya, Lamu, Northeastern and inside Somalia."

The Garissa terror attack claimed the lives of 148 students on April 2, 2015.

Duale asked Kenyans to join hands in the fight against terrorism as he sent his condolences to all those who were injured or lost their loved ones during the Dusit attack.

"For us to fight terror we must all be united, ready to watch over each other to expose all these criminal elements and terrorists who want to cause mayhem to our innocent citizens," he said.