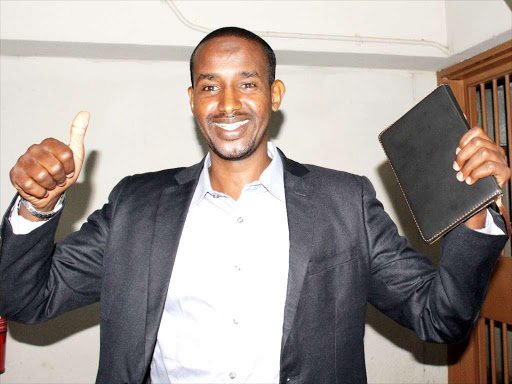 One of the suspects in the Westgate shopping mall terror attack Adan Dheq at a Milimani court yesterday when he was set free.Three other suspects were put on their defense. PHOTO/COLLINS KWEYU

One of the four people charged with carrying out a terror attack on Narobi’s Westgate Mall in September 2013 was freed yesterday for lack of evidence.

Chief magistrate Francis Andayi acquitted Abdikadir Adan alias Adan Dheq but said three others he was charged with have a case to answer.

The three are Mohamed Abdi, Liban Omar and Hussein Mustafah.

They were jointly accused of carrying out the terror attack in which 67 people died.

Dheq had been charged with providing accommodation to Mohamed Abdi in his house along Muyuyu Avenue in Eastleigh knowing that he had committed an act of terrorism.

He faced another charge of procuring a Kenyan identity card in Mandera on July 13, 2010, while he was a national of Somalia.

The freed man was also accused of being unlawfully present in Kenya.

The other three were charged with conspiracy to commit terrorism among other charges. They have denied the accusation.

They have also denied aiding terrorist groups and being in Kenya illegally.

The prosecution has more than 140 people to testify against them.

Magistrate Andayi said he was satisfied by the evidence linking the three to the four-day siege at the premier shopping mall.

At the end of the four-day siege, the militants had killed 67 people, some of them school children. More than 100 others were injured.

The case will be mentioned on Monday next week.​

Their first appearance in court was on Wednesday, January 15, 2014. Al-Shabaab, the Somalia-based terror group, claimed to have been behind the attack.

It has been waging terrorist attacks on Kenya, more so after former President Mwai Kibaki sent troops to Somalia to fight the militants in 2011.

Kenya invaded Somalia after a series of cross-border raids by the militant group.

Some of the reasons cited by Kenya include abductions of tourists along the Kenyan coast.

Four of the suspects who carried out the Westgate attack were killed in the four-day standoff. They were identified as Abu Baara al-Sudani, Omar Nabhan, Khattab al-Kene and Umayr.

They were identified using a CCTV footage.