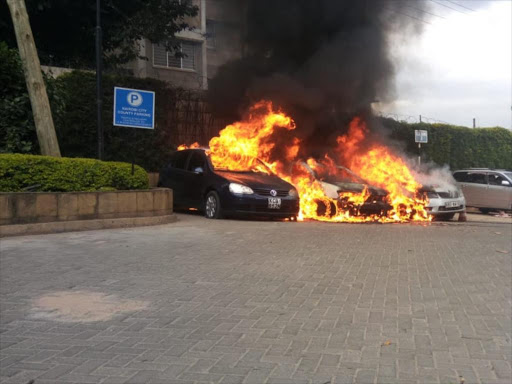 A loud blast and gunshots have been reported in 14 Riverside

drive in Westlands, a source has told the Star. Police suspect it could be a terror attack.

The attack comes on the third anniversary of the El Adde which took place on January 15,

gunshots could be heard from all quarters on Tuesday afternoon.

"Its in the same compound with Dusit D2 and commission for revenue allocation. For the past 15 minutes. Started with an explosion. We are lying on the floor in our offices can't look out," one of the workers said.

A car is seen burning along 14 Riverside Drive in Westlands, Nairobi on Tuesday, January 15, 2019. /MONICA MWANGI

There is an on-going police operation along that road and motorists are encouraged to avoid the area.

One of the people in the area only named Ronald said they were under attack from unknown people.

"Kumekuwa na bomb blast.. we are not safe..if I die please tell my children that I love them.. call the Israel Embassy and recce squad," he told the Star amid whisper.

Three vehicles could be seen burning in the area.

National Police Spokesperson Charles Owino said they have sent to the scene and cordoned off the area.

"We were informed of the shooting incident around Dusit Hotel. We have dispatched officers from the Terror Unit and the DCI to the scene. We should be able to know what is happening there in the next few minutes

Officers at the scene said the attackers came with a vehicle wearing a bulletproof vest ready to attack.

"Several hostages have been held in Dusit hotel and we are waiting for back up," the officer told the Star.

Students from the University of Nairobi have been evacuated at the Chiromo building as the operation continues.